An explosion at an oil refinery in southern Germany has left several people severely injured. The blast and the resulting fire prompted the authorities to evacuate over 1,800 people from the area. 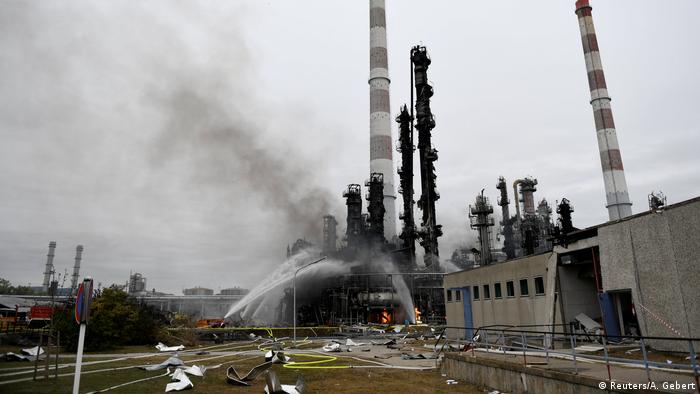 At least 10 people have been injured, four of them severely, in a powerful blast at a German oil refinery on Friday morning. The explosion sent out a shockwave that broke window panes and knocked out bricks from houses in the Bavarian town of Vohburg, near Ingolstadt.

German authorities deployed up to 600 firefighters to extinguish the subsequent fire at the Bayernoil complex.

Bavarian Interior Minister Joachim Herrmann said the scope of the destruction was "terrifying," describing piles of debris at the refinery complex.

"Entire walls have been torn down," he said. "Thank God that nobody died."

The cause of the blaze remains unclear.

More than 1,800 residents were evacuated as a precautionary measure due to heavy black smoke, and emergency services urged everyone within a 20-kilometer (12-mile) radius to "keep their doors and windows closed." Air tests later showed it was safe for people to return to their homes. 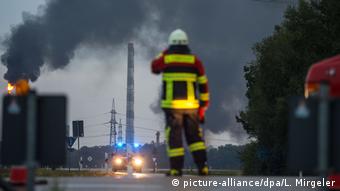 No danger for residents

The Donaukurier, a local newspaper, reported that a number of small explosions were heard after the initial blast and that the sound could be heard several kilometers away.

Authorities said the area would be cordoned off to prevent onlookers from getting too close to the scene and to minimize any danger.

Bayernoil has been operating the oil refinery on 127 hectares (313 acres) of land in Vohburg since 1967. The town of Vohburg is located on the shores of the Danube River.

Berlin fires may have been caused by arson

A major fire burning through a forested area just outside of Berlin has been brought under control. Authorities say the cause of the blaze is still unclear but "all indications" suggest it could be a case of arson. (25.08.2018)

A local mayor has said that while the region has often had forest fires, they have never been of this magnitude. The fire has spread to the size of 400 football fields. (25.08.2018)