NSA inquiry panel is not a Snowden committee | Germany | News and in-depth reporting from Berlin and beyond | DW | 03.04.2014

NSA inquiry panel is not a Snowden committee

The German parliament has just started examining the NSA affair with the help of an investigation committee. But the panel members have not been able to agree on the role Edward Snowden should play in the process. 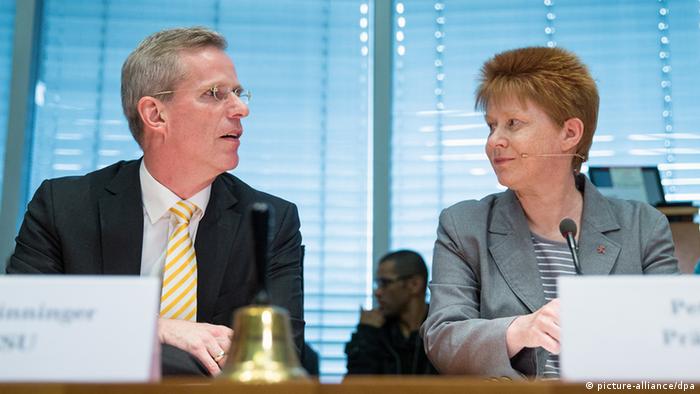 The United States is currently not a big help when it comes to resolving the NSA affair, despite several appeals from Berlin. Attempts to create a no-spy-agreement have reached a dead end, according to Clemens Binninger (pictured above with German Bundestag Vice President Petra Pau), who will lead the parliamentary committee charged with investigating the mass surveillance of German data by foreign intelligence services; in particular, the NSA.

The question catalogue that the German government sent to US authorities remains unanswered thus far, as a letter from the German Federal Ministry of the Interior suggests. 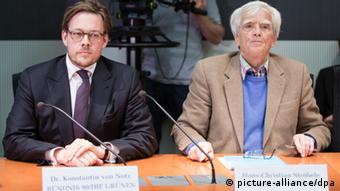 Binninger assumes that this won't change in the course of his panel's investigation either, which began its work on Thursday (03.04.2014). After all, the committee can do little more than appeal to the Americans and British to participate in the process. The eight members of the committee have no legal recourse to summon foreign witnesses and force them to testify.

But Binninger hasn't given up hope yet. In his view, replying to the question catalogue would be "an important first step toward restoring trust."

Binninger, a politician with the Christian Democratic Union (CDU), wasn't a fan of the NSA investigation committee from the beginning. The opposition parties - the Left Party and the Green Party - had asked for the committee in the German Bundestag. In the end, the Social Democrats and Merkel's CDU agreed to the request. What the members of the investigation committee can't agree on is whether Edward Snowden should testifybefore the committee or not.

Konstantin von Notz, from the Green Party, submitted a motion to invite the former US intelligence service employee as a witness. After all, it was the whistleblower who got the affair going 9 months ago, as Notz pointed out in an interview.

His party colleague Christian Ströbele met Snowden in Moscow last fall and brought back the message that Snowden was willing to testify - even from abroad, given the difficult legal situation. The US government is looking for Snowden with an international arrest warrant and has issued an extradition request to Germany.

US whistleblower Edward Snowden is to give video evidence to the European Parliament, a German assembly member claims. A parliamentary committee session will examine mass-surveillance by intelligence agencies. (06.12.2013)

Binniger is skeptical whether Snowden would really be able to help. After all Snowden himself said that he doesn't know anything else. And he only answered the questions of the European Parliament very generally.

But Patrick Sensburg, a member of the German parliament with the CDU, doesn't want to completely eliminate a witness questioning of Snowden, even though a different path would be less conflict-laden for the transatlantic relationship. Sensburg said that If Snowden is really serious about wanting to testify then he could arrange for cooperating journalists to make the documents available for the committee.

Martina Renner, deputy committee member for the Left Party, doesn't agree with this suggestion at all. According to her, the committee should question witnesses and not study files. Only witness questioning makes it possible to access "the knowledge in Snowden's head" and to ask further questions, she said.

Party colleague and committee member André Hahn also pointed out that the majority of the committee decides on the order of the examination of the witness. So even if Snowden were to be invited the questioning could still be delayed. Chairman Binniger indicated a time frame of two years for the committee's work.

Binninger hopes that the dispute over Snowden won't result in a hardening of fronts within the committee. That's why he wants to use the first two months to interview experts first. After all, the inquiry is broad in scope, he said.

Where are the limitations of international cooperation of German intelligence services? What are Americans allowed to do in Germany and what not? Did German authorities know about the practices of the NSA? Who operates and secures the Internet hubs - the sites that were used to get information? The investigation committee has to tackle all of these questions.