Germany′s attitude to Snowden shifts | World | Breaking news and perspectives from around the globe | DW | 01.11.2013

Hans-Christian Ströbele's trip to Moscow to see Edward Snowden may have been a typically maverick move from the Greens parliamentarian. But it could signal a major change in Germany's approach to the whistleblower. 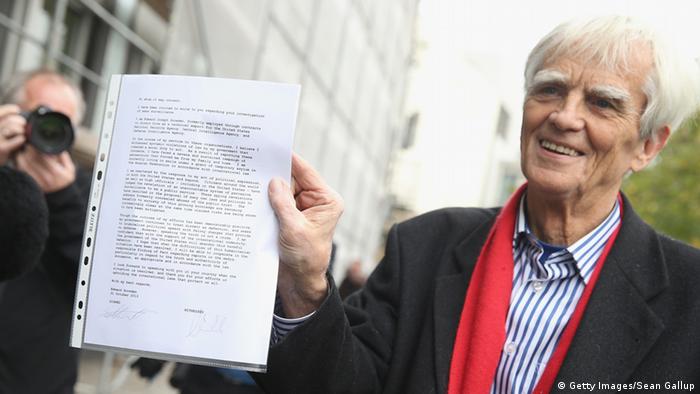 No one could accuse Hans-Christian Ströbele, a veteran Green party representative in the German parliament, of complacency. Having grown frustrated with the handwringing and speculation in Germany about what exactly Edward Snowden does and does not know, the 74-year-old politician decided he would take matters into his own hands.

"I asked myself, 'Why doesn't anyone ask him? It's not like he's disappeared from the world,'" Ströbele told a press conference on Friday (01.11.2013) in Berlin. Of course, it didn't turn out to be that simple, and months of negotiations left the proactive politician "sitting on a packed bag," as he put it, waiting for his chance to speak to the young American whistleblower.

That chance finally came on Thursday, when Ströbele and Snowden spent three hours discussing the National Security Agency revelations, and whether Snowden would be willing to come to Germany to testify to a parliamentary investigation on mass surveillance.

As well as the news that Snowden was healthy, in good spirits, and, yes, he was able to go shopping in Moscow whenever he wanted, Ströbele brought back an important message. 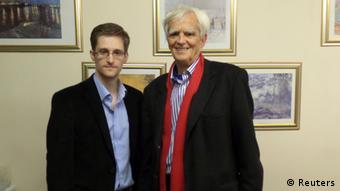 It came in the shape of a printed letter signed by Snowden and witnessed by Ströbele, which re-stated the former's commitment to his actions - "I believe I witnessed systemic violations of law by my government that created a moral duty to act" - as well as his hope that he would one day be able to help verify the authenticity of the actions he had uncovered.

In other words, given the chance, it appears that Snowden is willing to testify to a German parliamentary inquiry, or indeed a criminal investigation. Ströbele confirmed this in the press conference, before adding a crucial caveat.

"He would much rather testify to US Congress," the Green party MP said. "His sees his message as showing that something has gone wrong in the US, and that criminal activities have possibly taken place."

Ströbele said he had passed on copies of Snowden's letter to Chancellor Angela Merkel's office and the President of the German Bundestag. But, contrary to widespread reports both before and after its release, the letter as released by Ströbele's office is not addressed to Merkel - or in fact anyone in particular - and does not specifically mention Germany. Instead, it says "I look forward to speaking with you in your country when the situation is resolved."

Nevertheless, Ströbele reported that Snowden was willing to come to Germany - provided he was guaranteed asylum. That would be a vital condition, since Russian lawyers have already said leaving Russia would be a violation of the temporary political asylum Snowden had been granted. 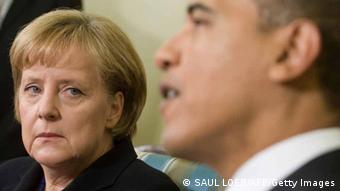 Importantly, Ströbele also confirmed that Snowden would indeed be a useful witness in any such investigation. "He was not just an administrator, he took part actively [in NSA activities]," Ströbele said. "He knows a lot about its internal structure, and can explain the documents he has released."

But whether it comes to that is another matter. Beata Hubrig, a German lawyer who occasionally advises digital rights group Chaos Computer Club, said Snowden's legal troubles would be significant in Germany.

"Nothing can be guaranteed," she told DW. "There is a bilateral agreement - an extradition treaty with the United States. How that treaty is interpreted would depend on the political will of the German government. It would depend on the pressure coming from the US, and more than likely that would be fairly immense."

Apart from the legal difficulties in getting Snowden out of Russia, the political consequences of such a move would be dramatic. Markus Kaim, security policy analyst at the German Institute for International and Security Affairs (SWP), said he is skeptical that Merkel's government would allow that to happen.

"I doubt whether he would ever get asylum in Germany," he told DW. "It's more likely that the parliamentary committee would have to fly to Moscow."

Nevertheless, there's no doubt that the German government's attitude to Snowden has changed significantly. "My impression is that through the latest developments - the 'chancellor's cell phone' scandal - there has been some movement in German policy," Kaim told DW, pointing specifically to the example of Hans-Peter Friedrich. Until the cell phone affair, Germany's conservative interior minister had always vehemently opposed offering Snowden asylum - now he is at least open to giving the whistleblower a voice.

"With this in mind, Ströbele's journey is, so to speak, 'the icing on the cake,'" said Kaim. 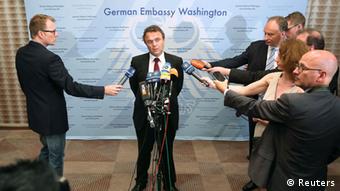 Part of the reason for this shift is the perception that previous attempts to get an explanation from the US government have been fruitless. After Snowden's leaks revealed evidence of mass surveillance of German e-mails by the NSA, Friedrich travelled to Washington in July to try to get answers.

"The German government's strategy of getting information through bilateral, confidential talks didn't lead to anything at all," said Kaim. "Then there was a delegation from the European Union that went to Washington, and nothing came of that either. Given that, it's certainly plausible to think about a new strategy."

That means only one thing: "Questioning Snowden would be a clear signal that Germany is not going back to business as usual, and it would certainly hurt the US government," said Kaim. "But does that mean the US government would just accept it? Probably not. Like everything in politics, there would be a price to pay."

Edward Snowden agrees to speak to German authorities about alleged US spying in the country - a perfect opportunity for Germany to demonstrate its independence from the United States, DW's Volker Wagener says. (01.11.2013)

It seems that every day brings new claims and counter-claims about who's spying on whom. Governments are trying to limit the damage, but that damage is not limited to governments, expert Jeremie Zimmermann told DW. (01.11.2013)