'Nothing to talk about' - Lammert backs out of el-Sissi meeting

With a meeting between Chancellor Merkel and Egyptian President el-Sissi approaching, Berlin's opinion on Egypt is increasingly divided. The Bundestag's Norbert Lammert has canceled his participation in the meeting. 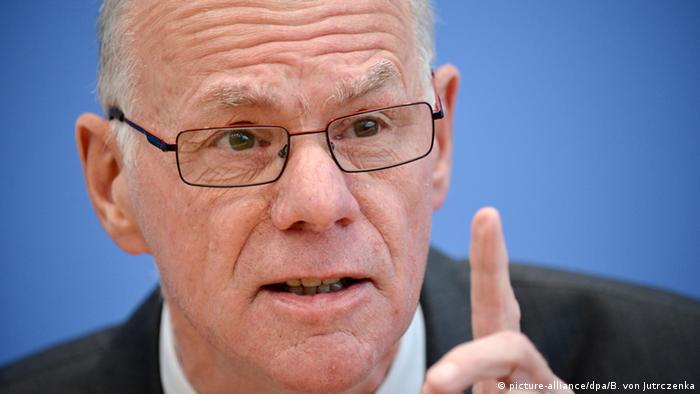 On Wednesday, the president or speaker of the German Bundestag, Norbert Lammert, expanded on his decision to call off his participation in a previously scheduled meeting with Egyptian President Abdel-Fattah el-Sissi.

Citing the lack of democratic development, the postponement of scheduled parliamentary elections in Egypt, and the mass arrests and death sentences of members of opposition political parties, Lammert said the minimum prerequisites for a meeting had not been fulfilled.

"In light of these circumstances, I don't know what the president of an elected parliament and the president of a country that is regrettably not led democratically have to talk about," Lammert told DW on Wednesday.

On Tuesday, a report was issued by the International Federation for Human Rights that outlined, among other troubling conclusions, systematic use of sexual violence by Egypt's security forces as a way of quelling opposition figures and activists.

El-Sissi's visit to Berlin will still take place on June 3 and 4. Chancellor Angela Merkel's spokesman Steffen Seibert said Merkel would still meet with el-Sissi because Egypt is "an immensely important player in the Arab world," and could help contribute to peace in the region. Merkel and Lammert hail from the same Christian Democratic Union (CDU) political party.

Formerly a military general, el-Sissi ousted former President Mohammed Morsi in a 2013 coup, which followed major public protests against the elected government. He has since been elected president by a landslide, but only after outlawing the Muslim Brotherhood organization Morsi represented. In turn, the Muslim Brotherhood called on its supporters to boycott the vote, in which 47 percent of eligible voters participated. Morsi currently faces a death sentence, but can appeal.

German President Joachim Gauck is also planning on sticking to the agreed meeting, according to a spokesperson from Gauck's office speaking to the Reuters news agency.

Signals from Berlin are mixed regarding Egypt. A spokesperson for the foreign ministry, for example, said in comments reported by the dpa news agency that there were many differences of opinion when it came to dialogue between the two countries.

Egypt's ousted Islamist President Mohammed Morsi has been sentenced to death on charges of jailbreak. Morsi's case will now be referred to a religious authority before an execution can take place. (16.05.2015)

Paraguay: President calls on cabinet to resign after protests over COVID response 6h ago