Egypt's ousted Islamist President Mohammed Morsi has been sentenced to death on charges of jailbreak. Morsi's case will now be referred to a religious authority before an execution can take place. 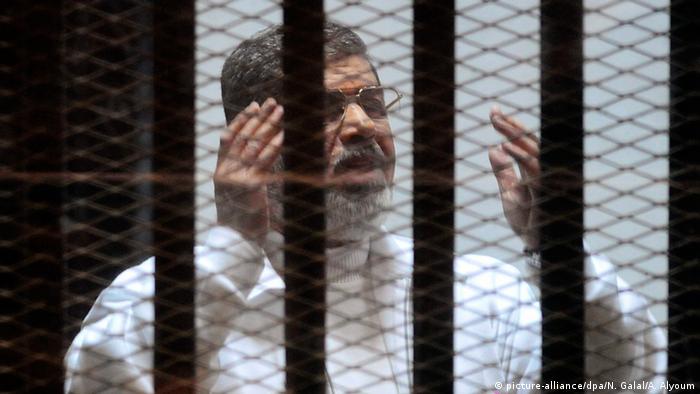 An Egyptian court sentenced the country's former president, and more than 100 other defendants, to death on Saturday over a mass prison escape during the 2011 uprising that toppled then President Hosni Mubarak.

Morsi sat through the reading of Judge Shaaban el-Shami’s verdict in a caged dock.

Many of the other defendants were tried in absentia, including prominent Islamic cleric Yusuf al-Qaradawi who lives in Qatar.

Supporters of the ousted president chanted "down, down with military rule" as el-Shami read his verdict in the packed courtroom, a converted lecture theater in the national police academy in an eastern suburb of Cairo.

As is customary in decisions resulting in capital punishment, the case will now be referred to the country's top religious authority, the Grand Mufti, for opinion before any execution can occur. His decision at the June 2 hearing is non-binding.

An official from Morsi’s Muslim Brotherhood party, Amr Darrag, condemned the decision and called on the international community to take action.

"This is a political verdict and represents a murder crime that is about to be committed, and it should be stopped by the international community," Darrag, co-founder of the now defunct Freedom and Justice Party, a political wing of the Muslim Brotherhood, told the Reuters news agency.

Turkey's President Recep Tayyip Erdogan slammed the death sentence decision, saying, "the popularly-elected president of Egypt...has unfortunately been sentenced to death. Egypt is turning back into ancient Egypt." Speaking at a political rally in Istanbul, Erdogan further accused the West of "turning a blind eye" to the 2013 coup.

Prosecutors allege armed members of the Palestinian Hamas group entered Egypt during the 18-day revolt through illegal tunnels under Gaza’s border with Egypt’s Sinai Peninsula. The militants then fought their way into several jails, releasing Morsi along with more than 30 other Muslim Brotherhood leaders and 20,000 inmates.

Morsi, Egypt’s first democratically elected president was ousted in 2013 by the military following days of street protests demanding his removal. The president’s overthrow triggered a government crackdown on his Muslim Brotherhood movement.

Hundreds of movement members have died and thousands have been imprisoned following now President Abdel-Fattah el-Sissi's banning of the group. El-Sissi was the military chief at the time Morsi was overthrown and led the coup.

Morsi was sentenced last month to 20 years in prison for inciting violence against protestors in 2012 when he was the country's president. Rights group, Amnesty International called the verdict a "travesty of justice."

Even if the mufti confirms Morsi’s death sentence, he can still appeal the verdict.

An Egyptian court has dissolved bands of hard-core football supporters. Various factions of "ultras" were at the forefront of Egypt's 2011 uprising. (16.05.2015)