While the Scandinavian country of Norway may be one of the largest oil producers in Europe, it also has more electric cars per capita than any other country. State incentives have been the key to success, experts say. 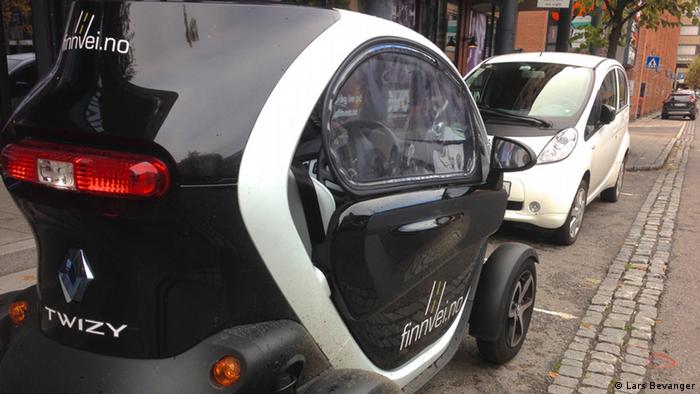 Espen Andreassen is the proud owner of a new electric Nissan Leaf car, making him one of over 4,000 Norwegians who has bought an electric car so far this year. So far, nine percent of all new cars sold in Norway in 2013 have been electric.

"Cars in Norway are extremely expensive due to the way they tax cars," Andreassen told DW. "They often cost twice of what they cost in other comparable countries. But, there is basically no tax on electric vehicles. If we were going to buy a petrol or diesel car, it would have been about the same price."

Espen Andreassen and other electric car drivers enjoy a host of other benefits too. One of the more popular incentives is being allowed to use the bus lane. Electric cars speed past rush hour queues in and out of Norway's larger cities, often halving commuting times. 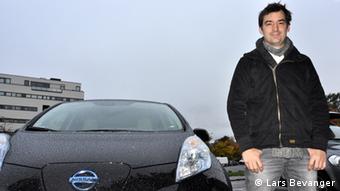 Espen Andreassen was happy to choose an electric car ahead of a petrol-powered option, he says

"For us it's fantastic. Usually we drop the kids at kindergarten and my wife and I drive together. That saves us a lot of time," said Andreassen.

Norway's electric car revolution has happened fast, with most of the growth in sales happening over the past three years. But, this is a result of years of lobbying from electric car owners and their organisations.

"It took a long time to get the benefits," said Snorre Sletvold, President of Norway's Electric Vehicle Association.

"It started with no import tax and no first time registration tax. Now we also get free parking and free passing through the toll roads, exemption from VAT and access to use the bus lane. It took 10 years to get all these benefits in Norway," he said.

The rapid increase in electric car sales has had a noticeable environmental impact too. According to the Norwegian Information Council for Road Traffic, the average carbon dioxide (CO2) emission from cars in Norway is currently 118 grams per kilometer, down from 125 grams per kilometer last year. That easily beats the EU target.

Yet critics say this is a drop in the ocean when it comes to Norway's global responsibilities for climate change. The country is the world's eighth largest crude oil exporter and third largest exporter of natural gas.

"Even though Norway is the country with the most electric cars per person, it's not going to save the world," says Lars Haltbrekken, chairperson of the Norwegian division of Friends of the Earth.

"The largest environmental footprint in Norway comes from our huge oil and gas production," he told DW.

Haltbrekken says that when emissions from Norway's most recently-discovered oil and gas field are calculated, they would total CO2 levels equivalent to that of 40 million cars. 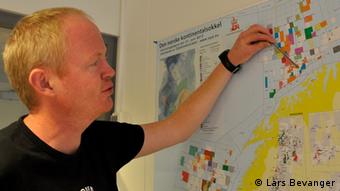 Others argue that electric cars don't necessarily produce much less CO2 than modern fossil fuel cars. The production and disposal of batteries and the oil and gas needed for electricity production all adds up to give an electric vehicle a much larger CO2 footprint than many believe.

The Norwegian Parliament in Oslo has guaranteed generous incentives for electric cars until 2017. If the current growth in sales of these vehicles continues, those incentives will have to be reconsidered.

"Of course the bus lane will have to be closed for electric cars one day. Then we have to find another way. Maybe we will have to raise the tax in the toll fee for petrol cars," said Snorre Sletvold from the Electric Vehicle Association.

Not surprisingly, electric car manufacturers have taken a special interest in Norway, and despite the possible rolling back of some government incentives they remain optimistic about the future Norwegian market. 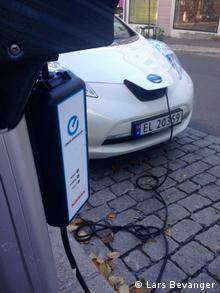 An electric car charging station in the Norwegian capital of Oslo

"Norway is by far our biggest market in Europe, and actually it's the second biggest market for us globally," said Esben Pedersen from Tesla Motors, a US company making luxury electric cars.

Despite a price tag starting at 71,400 euro ($96,430), the Tesla Model S was the best selling car in Norway in September this year, beating the trusty VW Golf into second place.

"Whereas politicians elsewhere in Europe do a lot of talking, in Norway they actually act and they have a national electric vehicle policy as the only country in Europe," said Pedersen. The government's willingness to invest in electric car use helped Tesla make the decision to invest in a Norwegian network of super-chargers, electric hook-up points which can charge an electric car battery in less than one hour.

The chicken and the egg

The number of electric cars globally is still very small, and even if the rest of the world caught up with Norway, the energy needed to charge them all would still be coming mainly from fossil fuel sources.

To some it is a chicken and egg issue: do we wait until most energy production is sustainable before turning to electric cars, or do we go electric and hope this will help speed up the growth of alternative energy production? Electric car owner Espen Andreassen in Oslo believes in the latter.

"We can't wait until all power sources are renewable before we start developing and driving and buying electric cars. The amount of renewable energy in the EU mix is increasing, so it will get better all the time. At least we have to try and see if it works out," he said.

Meanwhile Norway's love affair with the electric car shows no signs of abating. According to a recent survey, more than half of Norwegians would consider an electric or hybrid for their next car.

In an effort to encourage residents onto public transport, one South Korean city is asking its residents to go car-free for a month. As one of the organizers explains, the project is meant to have a long lasting effect. (30.08.2013)