In an effort to encourage residents onto public transport, one South Korean city is asking its residents to go car-free for a month. As one of the organizers explains, the project is meant to have a long lasting effect. 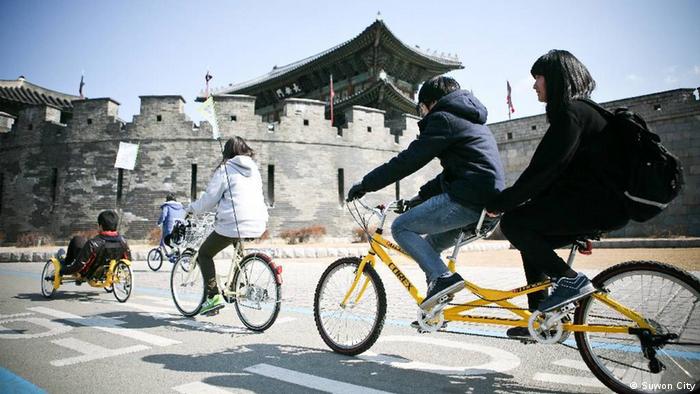 Car-free days are aimed at encouraging people to use public transport, bicycles or simply walk. Transport expert Santosh Kodukula is helping organize a car-free month in the South Korean city of Suwon, called the EcoMobility World Festival. The event starts on September 1.

DW: How would you describe the city of Suwon?

Santosh Kodukula: Suwon is 30 kilometers south of Seoul and has a population of over one million people. It is very common to find that Asian cities are densely populated. And, imagine, in such a dense city as Suwon, you have only four or five main roads.

Are there a lot of cars on the road?

The city has been changed to facilitate more cars. It is like an invitation for road users to drive their cars and they feel that it is more comfortable to drive.

South Korea has gone through an incredible amount of change over the last few decades. People have become more affluent meaning more people are buying cars, especially as a status symbol. How are you going to get the people out of their cars?

It is a really big challenge for any city that loves its cars to say 'I want to turn my car off and take other modes of transport.' There is something called a push and pull mechanism. When you want to push people out of their cars, you have to have something that pulls them into the other modes of transport. You have to make the other modes attractive enough for people to say, I can do my regular trip with another mode of transport. Most car trips that people take are very short and do not actually require a car. Bicycles and innovative light electric vehicles could offer an alternative. 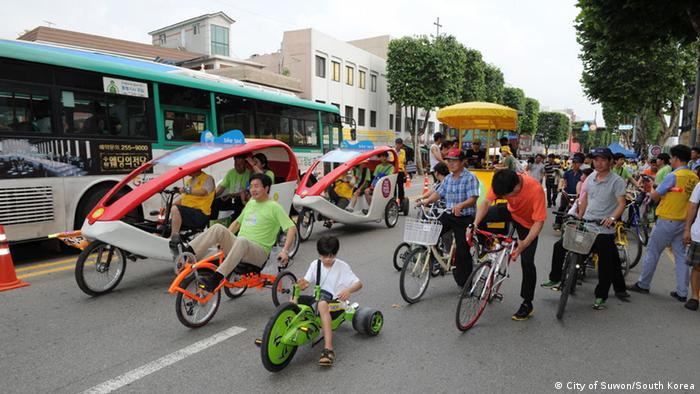 What kinds of innovative electric vehicles are we talking about?

We have the regular electric vehicles, electric cars and electric bicycles. But there are also design changes to regular bicycles to make them both attractive and more comfortable. Thanks to the recent innovations and designs, you get all kinds of new bicycles with batteries fitted to them or foldable bicycles, which you can take with you on to public transport. There are also foldable electric bicycles. The residents of the neighborhood will get a chance to experience travelling by these means of transport.

Do you know what impact the car-free month will have on Suwon's carbon dioxide output for the month?

It will definitely reduce the carbon emissions. But in order to measure the impact, we have to see the travel patterns before and after the festival. If we measure it after the festival, we'll know how effective the festival has been in terms of putting this behaviour into the peoples' minds and if people are ready to accept this new lifestyle.

It sounds like a learning experience for everyone: Your organization is going to find out how people respond to new ideas about transport, and people in Suwon are going to find out whether they can get through life without their vehicle. 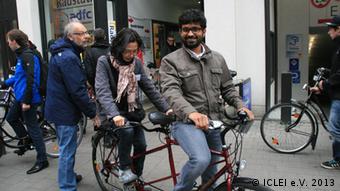 It is a huge learning experience for everybody because there have been car-free days, but up to now there has never been a car-free month. Usually, if you propose a car-free month to a city, the city leader would say: ‘No, I can't remove the cars. The businesses would protest, the people will not change, they don't want to take another mode of transport.' They come up with all kinds of excuses. But they don't actually know whether people will really react like this or not.

When the idea was first proposed to the mayor of Suwon in 2011, the mayor was very excited. He accepted the challenge and said, let's make Suwon into a car-free zone for a period of four weeks. It is very commendable that he took up this challenge and is ready to implement it in an area of the city.

Are you planning to host similar events around the world in other places?

As an organisation, we are really interested in hosting. At the same time we also need the support from the city governments. Only if the city leader is ready to take this challenge on, can we actually achieve change. We have no shortage of ideas of what we can do in cities but we also want the city leaders to come on board and take part in such activities.

Santosh Kodukula is a transport expert at the organization ICLEI Local Governments for Sustainability. The German-based NGO is helping the South Korean city of Suwon conduct a car-free month in September 2013.