Norway: One injured in shooting at Oslo mosque

A person has been injured in a shooting at a mosque in the suburb of Baerum near the Norwegian capital, Oslo. Police said a suspect has been arrested. 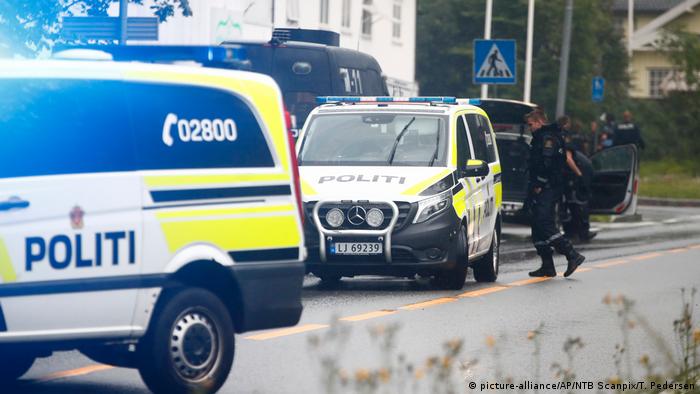 A shooting inside a Mosque near the Norwegian capital, Oslo, on Saturday has left one person injured, police said.

Police were alerted to the shooting at the al-Noor Islamic center in Baerum, a suburb of Oslo, shortly after 4:00 p.m. local time (1400 UTC).

The victim was a 75-year-old member of the congregation, mosque director Ifran Mushtag told local TV2. Mushtag said the shooter, who was wearing body armor and a helmet, was a young white man, and that he was overpowered by members of the mosque before police arrived.

Authorities said a suspect had been arrested and there was no indication more people were involved. "It is a Norwegian young man, with a Norwegian background. He lives in the vicinity," police spokesman Rune Skjold told a press conference late Saturday.

Skjold added that the suspect had been known to police before the incident but could not be described as someone with a "criminal background."

A woman related to the suspected gunman was later found dead in a home near where the attack took place. "We consider this a suspicious death... The dead person is related to the man arrested earlier today," Skjold told reporters.

The suspect has refused to answer police questions, police said on Sunday.

"An attempt was made last night to interrogate the accused after the mosque shooting and the murder in Baerum, but he did not want to give an explanation to the police," Rune Skjold of the Oslo police said in a statement.

The attack took place on the eve of the Muslim celebration of Eid Al-Adha, and police said they were looking into whether any steps needed to be taken to "improve security."

Earlier this year, the mosque implemented extra security measures after more than 50 people were killed at two New Zealand mosques by a suspected right-wing extremist.

The suspected Christchurch Mosque shooter reportedly sent funds to a far-right French group before sending a "donation" to Austria. The Austrian far right have recently come under scrutiny for their links to the shooter. (04.04.2019)

A well-known and controversial imam and one other person were wounded in the attack on the Sunna mosque in Brest on the French Atlantic Coast. The gunman was later found dead. (27.06.2019)

New Zealand police have raised concerns over people faking their presence at two deadly mosque shootings in March. More than NZ$7 million has been paid out to survivors by local victims' funds so far. (28.06.2019)