The 21-year-old man is suspected of opening fire in a mosque and breaching anti-terror laws. He has pleaded not guilty and refused to be interrogated by authorities. 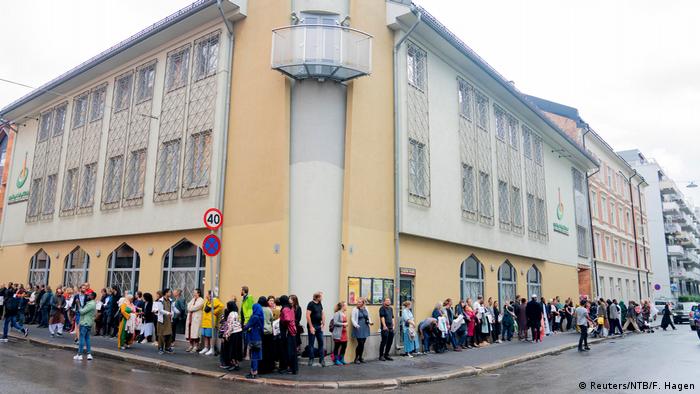 A man held by Norwegian authorities as a suspect in the shooting at the al-Noor Islamic Centre, outside of Oslo, appeared in court on Monday. The 21-year-old is also suspected to have murdered his 17-year-old stepsister.

No one was killed and one person was injured in the attack. Only three people were present at the house of worship when the suspect opened fire and one of the congregants was able to overpower him until police arrived.

"He is exercising his right not to be interrogated," his defense attorney, Unni Fries, told Reuters. "He is not admitting any guilt."

The suspect is said to have held far-right and anti-immigrant views , police said on Sunday.

Faces up to 21 years in prison

The 21-year-old will remain in pretrial detention for four weeks, after the court granted a request from prosecutors.

Authorities were seeking to hold him on suspicion of murder and for breaching anti-terrorism law by spreading severe fear among the population.

"The investigation is still in an early phase and the suspect has not made any statements to the police," police said in a statement.

If he is found guilty of breaching anti-terrorism laws or for the killing of his stepsister, he would be facing up to 21 years in prison.

The suspect in last Saturday's mass shooting in El Paso has told police he was targeting 'Mexicans' in the attack. Authorities believe he wrote a racist screed decrying a 'Hispanic invasion' of the US. (10.08.2019)

Armed with a semi-automatic gun, the Ohio shooter killed nine people including his own sister. Friends of the man told news outlets he had troubling behavior around women. The FBI has opened a probe into his motives. (07.08.2019)