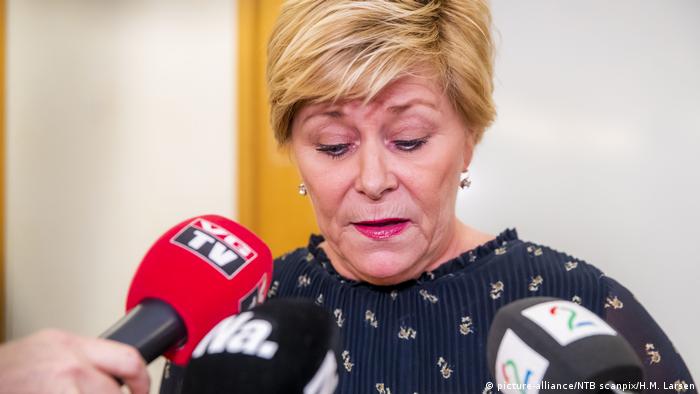 Norway's right-wing Progress Party pulled out of the governing coalition on Monday after the government chose to repatriate a woman charged with supporting terrorist groups while she was in Syria.

Finance Minister Siv Jensen announced the move at a press conference, saying that it had become too difficult to get enough of her populist party's policies through government.

"I brought us into government, and I'm now taking the party out," Jensen told a news conference.

The move means that Conservative Prime Minister Erna Solberg no longer has a parliamentary majority.

Shortly after the announcement, Solberg said she intends to stay in office as the head of a minority government, although the situation is likely to make it more difficult for her to govern.

Norway's constitution does not allow for early elections, with the next parliamentary vote due to take place in September 2021.

Last week, Norway's Cabinet decided to allow the woman to return to Norway with her two children so that her 5-year-old son could receive medical treatment. The three had been living in the Kurdish-controlled al-Hol refugee camp in Syria.

The woman, who left Norway in 2013, was arrested upon her return on suspicion of being a member of the militant "Islamic State" (IS) group.

The woman's lawyer says she denies the charges against her and will cooperate fully with police.

The Progress Party offered to help the woman's children, but sought to block the government from providing assistance to adults seeking to return to Norway after marrying foreign fighters or joining Islamist groups abroad.

Countries across Europe have been struggling with whether or not to allow their citizens who left to join the fight in Syria, or marry IS militants, to return home. In November, Germany repatriated a woman suspected of being an IS member along with her three children.

Finland's government recently reached a compromise on the issue, deciding to look at each case individually.

Three German children in northern Syrian and their one-time "Islamic State"-affiliated mother must be brought back by Germany’s federal government. That’s been confirmed by a regional appeal court in Berlin. (07.11.2019)