Three German children in northern Syrian and their one-time "Islamic State"-affiliated mother must be brought back by Germany’s federal government. That’s been confirmed by a regional appeal court in Berlin. 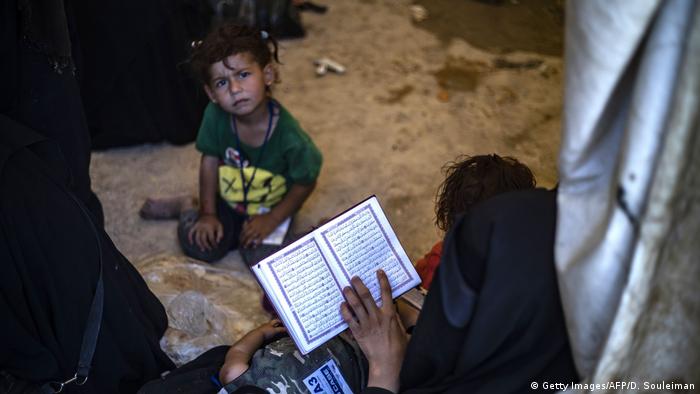 Germany's Higher Administration Court (OVG) in Berlin-Brandenburg on Thursday ruled that three children and their mother must be brought back from northern Syria.

While the German Foreign Ministry was prepared to repatriate the children, it refused to bring back the mother citing — like many other European countries — risks to national security.

The mother entered an "Islamic State" (IS)-controlled part of Syria in 2014 with the two elder children. The third was born there before IS was vanquished.

In its ruling Thursday, the OVG said the children — now aged 8, 7 and 2 — would still need their mother after being repatriated from the Kurdish force-run al-Hol camp, and that they were traumatized.

Furthermore, the court found that the government had failed to show any evidence or indication of a "concrete" security risk being posed by the mother.

In July, a lower court had ruled that the three children were entitled to German consular protection for citizens abroad.

Nearly 70,000 people, mostly women and children, are still in the al-Hol camp — including about 11,000 foreigners with past links to IS.

On Thursday, a lone 11-year-old Albanian boy was on track to return home to Italy with his father, Red Cross and Red Crescent (IFRC) officials said.

The boy headed from al-Hol to Italy Thursday was named Alvin, an Albanian 11-year-old whose mother died amid the fighting — leaving him alone and the first such case to be facilitated through the IFRC.

An Italian television news show had portrayed the father's anguished efforts to bring him home, captivating public attention in Italy.

Francesco Rocca, President of the IFRC said he hoped Alvin's case would bring "healing to his family," adding it was "barely a drop of relief in an ocean of suffering."

"What we can and should be focusing on is the fact that there are still over 68,000 people — two-thirds of which are children — living in the al-Hol camp," he said.

Germany's federal interior ministry on Thursday said a "three-digit" number of people from Germany were with Kurdish militias in Syria and northern Iraq.

Roughly half of them had German citizenship. The others from German were people with Turkish, Syrian and Iraqi statehood.

Some 100 such individuals have since returned to Germany, with prosecution cases proceeding in some 30 cases.

300 babies die in war zones every day, Save the Children reports

Some 300 babies worldwide die every day due to the effects of war, Save the Children has estimated in an analysis focused on 2017. About one in five children — or 420 million total — were living conflict zones. (15.02.2019)