A German woman suspected of being an "Islamic State" member has been repatriated along with her three children, according to German media and a Kurdish official. A child from the US has gone through the same process. 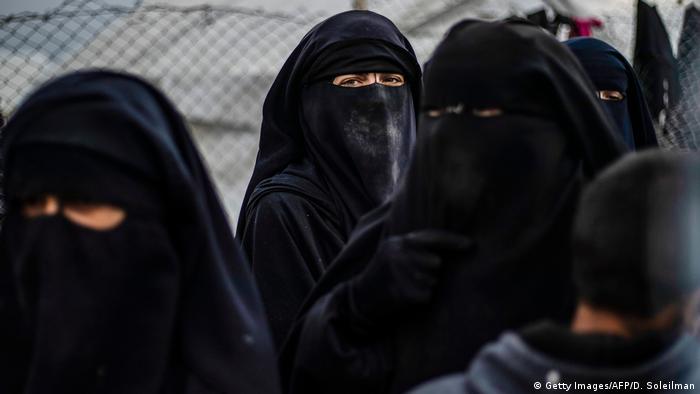 Syria's Kurds completed the handover of three German children and their mother, as well as a toddler from the US, to their respective ministries, a Kurdish official confirmed on Saturday.

Abdelkarim Omar, a senior official with the Kurdish authorities in northeastern Syria, said the transfer of the individuals had taken place on Friday.

"An American child and three German children with their mother were handed over to their governments," he said in a statement on Twitter.

German authorities had previously ordered for the mother, who Der Spiegel news magazine identified as 30-year-old Laura H. from central Germany, to be returned to her home country from a Syrian camp, saying that she left the country and joined the jihadi militia in 2016. She and three of her children were reportedly living in the Kurdish-run prisoner camp al-Hol in northern Syria.

On Friday, German officials confirmed that three "German children who were detained in northern Syria, would be able to leave for Iraq together with their mother."

According to media reports, German authorities have been investigating the mother on suspicion of membership of a terror organization and child neglect.

Female "Islamic State" suspects have already faced detention and trial in Germany, but prosecutions have been limited to suspects who traveled back of their own accord or were extradited by other countries. The case of Laura H. is the first time that German authorities themselves repatriated such a suspect.

US girl under care of 'IS' suspect

According to a Kurdish source, the girl from the United States, who was born in 2016, was handed over to a US official at the Samalka crossing with Iraqi Kurdistan.

In addition to Laura H's own children, the girl with US citizenship was also in her care, said sources cited by the mass-circulation Bild newspaper. Bild reported that the girl is the daughter of the woman's first husband, who is himself a US citizen. It was not immediately clear how the child came to be with Laura H.

German security sources believe that more than 80 German IS members remain captive in Syria. Berlin recently announced that it would decide on the repatriation of jihadi wives on a case-by-case basis. Several children have already been repatriated from the camps in the Middle East. Earlier this month, a German court ordered that a different IS-linked mother and children must be repatriated together, because the minors were dependent "on protection and care of their mother."

European Union nations face immense international pressure to take back former "IS" members, but the European officials have been dragging their feet over security concerns.

Germany repatriates female IS members and their children 31.03.2022

Foreign Minister Baerbock confirmed that nearly all German women who are willing to return have done so. Many were taken into custody upon arrival on terrorism-related charges.

Several women with ties to the group are being held in custody after returning to Germany. Foreign Minister Heiko Maas said the women "will have to answer for their acts." The children will be placed in protective care.