A cycle of minority governments had plagued Prime Minister Erna Solberg's tenure. The Conservative Party leader reached a deal with the Christian Democrats, agreeing to their demand for changes to Norway's abortion law. 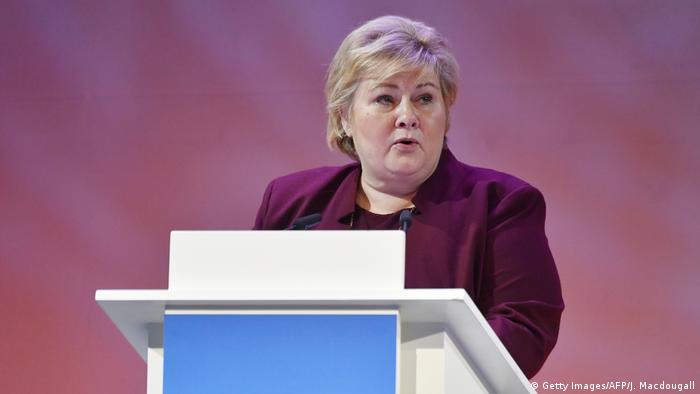 Norwegian Prime Minister Erna Solberg reached a deal with the small Christian Democratic Party on Thursday to form a center-right majority government. The move is set to strengthen Solberg, who has been in power since 2013 and was re-elected in 2017.

"This is a historic day. Norway is getting its first non-socialist majority government since 1985," said Solberg, who has led Norway's Conservative Party since 2004.

"We had tough negotiations," Solberg said, celebrating the deal alongside leaders of the Christian Democrats and her existing governing partners of the Progress Party and the Liberal Party.

But the new majority did not come without a cost, as the deal involved caving to demands by the Christian Democrats to amend Norway's abortion law.

The parties in Solberg's coalition agreed to end so-called "selective abortions," a woman's right to abort a fetus in a multifetal pregnancy, which can be done to limit the number of births.

But Solberg stopped short in the most controversial Christian Democrat proposal, which sought to end the right to late-term abortion, in cases where a fetus is diagnosed with Down syndrome or other genetic conditions.

Solberg hopes that a majority government will provide more stability to her administration and help ease her path to re-election in 2021.

Norway has often been ruled by minority governments, which require the support in parliament of opposition parties to pass laws.

Norway, western Europe's top oil and gas producer, is set to continue drilling around the scenic Lofoten islands in the Arctic until 2021 and will uphold tax breaks on oil exploration.

The oil industry welcomed the government platform. "We're happy that the government continues the broad line of policy, securing jobs all over the country and vast income for society," lobby group Norwegian Oil and Gas said in a statement.

The leaders of China and Norway have met, signaling the resolution of a diplomatic spat which lasted six years. It followed the awarding of the Nobel Peace Prize to an imprisoned dissident in China. (10.04.2017)