The leaders of China and Norway have met, signaling the resolution of a diplomatic spat which lasted six years. It followed the awarding of the Nobel Peace Prize to an imprisoned dissident in China. 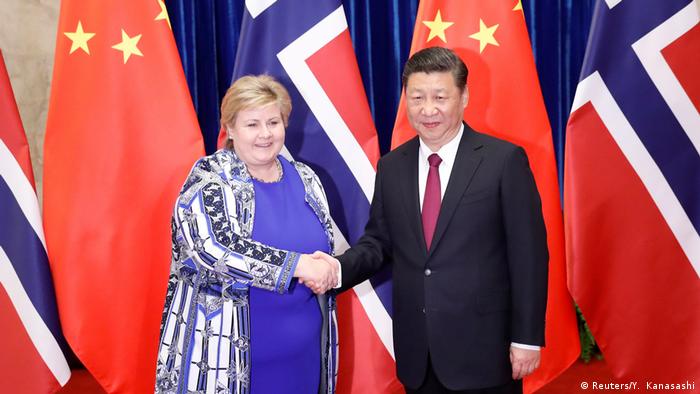 Chinese President Xi Jimping lauded the normalization of relations between his country and Norway on Monday, during a meeting with Norwegian Prime Minister Erna Solberg in Beijing.

"Your visit this time holds a lot of significance," Xi said. "This is the first high-level visit since the normalization of China-Norway relations in December." It was the first visit from a Norwegian prime minister to China in a decade.

Relations had soured in 2010 after the Nobel Peace Prize was awarded to Liu Xiaobo, a Chinese dissident who had been sentenced to 11 years in prison after being convicted of subversion in 2009. He had written a manuscript calling for democracy in China.

Although the Nobel Committee is based in Norway's capital Oslo, the country's government has no say over the panel's decisions.

Nonetheless, China deemed the move interference in its internal affairs and called for Norway to recognize the "error" of awarding Liu the prize. It suspended its diplomatic relations and bilateral trade deal with Norway, as well as restricting imports of Norwegian salmon.

Solberg said she was "delighted" to be back in China, adding that Norway's king would be visiting the country in 2018 after he was invited by Xi. On Friday she met Premier Li Keqiang and signed several documents outlining issues of cooperation between their two nations, populations 5 million and 1.3 billion respectively, including an agreement to resume talks on a free trade pact.

Xi mentioned that Norway was one of the first Western countries to recognize the People's Republic of China and also one of the earliest to acknowledge its status as a market economy.

Solberg's visit to China was due to end Tuesday.

COVID vaccine: Moderna shots can be 6 weeks apart, WHO says 1m ago