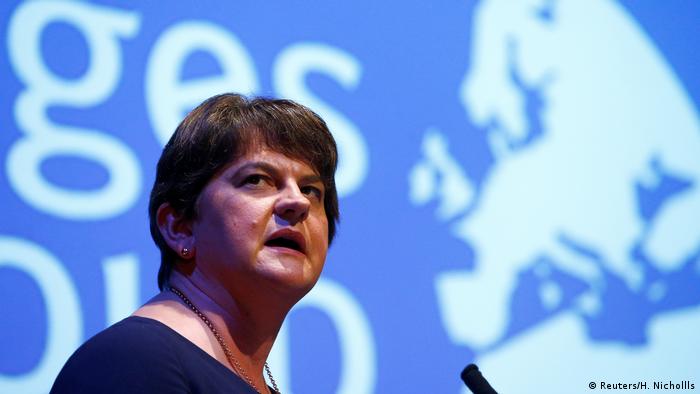 The Democratic Unionist Party (DUP) said Sunday it was seeking a judicial review of a Brexit protocol, which it says has caused widespread confusion among businesses.

While the UK left the EU's single market and customs union, both sides agreed to keep Northern Ireland inside the market to avoid the need for a potentially hard border with the EU member Ireland. Instead, goods entering Northern Ireland from mainland Britain are required to go through customs checks so that they don't end up in the EU single market via Ireland.

But some UK suppliers have refused to ship goods across the Irish Sea because of these checks, which has caused a shortage of items in Northern Irish supermarkets.

London and Brussels are trying to fix growing problems with the Northern Ireland Protocol since Britain formally quit all EU structures at the end of 2020.

Protocol not compatible with key agreements

Northern Ireland's leading pro-UK party said it wanted courts to declare the Northern Ireland Protocol incompatible with the 1800 Act of Union, which merged the kingdoms of Britain and Ireland, and with the 1998 Good Friday Belfast Agreement, which ended three decades of political turmoil in the territory.

"Fundamental to the Act of Union is unfettered trade throughout the United Kingdom," DUP leader Arlene Foster said in a statement.

"The views of unionists will not be sidelined, nor our concerns silenced," Foster added.

Senior UK minister Michael Gove and EU Commission vice president Maros Sefcovic, who co-chair a committee on the protocol's implementation, have vowed to "spare no effort" on finding solutions to the protocol issue.

Gove has been pressing Sefcovic to extend a three-month grace period for Northern Irish supermarkets for most checks until 2023.

Fears of sectarian tensions have grown in Northern Ireland after the European Commission said in early February that it would restrict COVID-19 vaccine exports to the territory, as the bloc struggles with its own supply.

Although the EU quickly reversed its decision, it has intensified opposition to the new regulations, with checks at two ports in Northern Ireland temporarily suspended this month.