North Korean state media has released footage of the secretive Supreme Leader. Media speculation about his health grew when he failed to show up to his late grandfather's birthday celebrations. 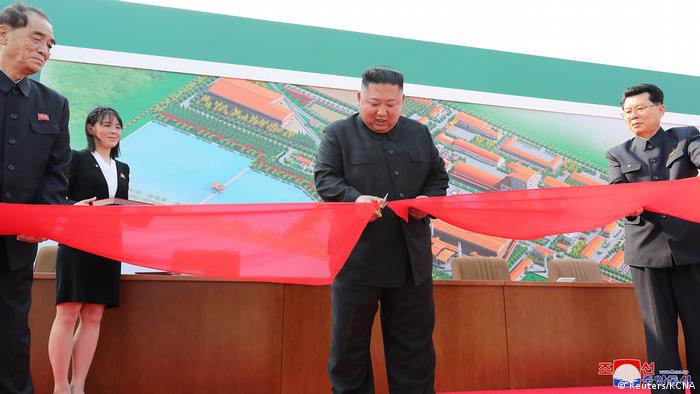 Video footage of North Korean leader Kim Jong Un attending a fertilizer plant opening has been released by state media outlet the Korean Central News Agency (KCNA). The footage follows KCNA reporting that Kim cut a ribbon at the event on Friday, ending three weeks of speculation about his wellbeing.

The video footage, which emerged on Saturday, shows the leader of the secretive East Asian nation in an all-black suit. He appears relaxed and healthy while he claps, talks and cuts a red ribbon in front of the factory. He is surrounded by functionaries — most of who are wearing facemasks.

The video footage has not yet been independently verified, but it is thought to be from Friday.

A crowd of people also clap and cheer in the footage, seeming to confirm the earlier KCNA report that those in attendance at the ceremony just north of the capital "burst into thunderous cheers of 'hurrah!' for the Supreme Leader.

How long was Kim missing?

Kim was last seen in public three weeks ago when he chaired a Workers' Party meeting. Speculation over the secretive leader's wellbeing grew after he failed to attend the birthday celebration of his late grandfather and state founder Kim Il Sung on April 15 — despite it being the most important day in North Korea's calendar.

Media reports that first surfaced in Daily NK — a Seoul-based media outlet specializing in North Korea — and US news network CNN, suggested that the 37-year-old leader had undergone heart surgery and was in "critical condition."

But this was downplayed by the South Korean government earlier this week. Moor Chung In, the foreign affairs advisor to South Korean President Moon Jae-in, said that the North Korean leader was in good health. US President Donald Trump contributed to speculation, saying he was aware of Kim's health and wishing him well at a press conference on Monday.

North Korea exerts strict control over information about its ruling elite, which has little contact with international institutions.

Media interest is often stoked by the notable absence of the country's leading figures from key events. In 2014, Kim disappeared for nearly six weeks before reappearing with a cane. South Korea's spy agency later said he had a cyst removed from his ankle.

After weeks of speculation that North Korean leader Kim Jong Un is critically ill or even dead, South Korea has tried to put the rumors to rest. But verification outside of North Korea remains to be seen. (27.04.2020)

Rumors have been swirling about the North Korean leader's health since he vanished from the public eye earlier this month. Now a train thought to be his has turned up at his Wonsan compound, satellite images have shown. (26.04.2020)

Reports about the young dictator undergoing heart surgery have neither been confirmed nor categorically denied, but there is already conjecture about who might inherit the leadership of North Korea. (22.04.2020)