Rumors have been swirling about the North Korean leader's health since he vanished from the public eye earlier this month. Now a train thought to be his has turned up at his Wonsan compound, satellite images have shown. 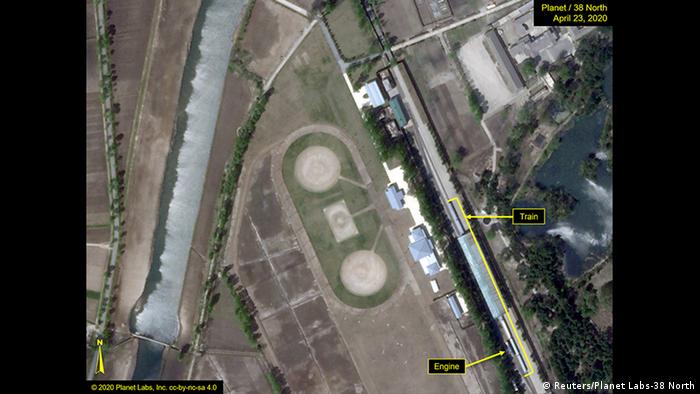 A train likely to belong to North Korean leader Kim Jong Un has been parked at his Wonsan compound since at least April 21, according to commercial satellite imagery shared by North Korea monitoring website 38 North.

The report comes amid speculation about Kim's ill health after he vanished from the public eye and missed the April 15 commemoration of the birthday of his late grandfather and North Korea's founder, Kim Il Sung.

"The approximately 250-meter long train" was seen parked at the Leadership Railway Station at the compound on both April 21 and 23, but was not present on April 15, 38 North reported.

The train appears to have arrived at the station, which is reserved for use by the Kim family, "sometime before April 21" and appeared to be "repositioned for departure" on April 23.

The satellite images do not say anything about Kim's health, but the train's presence lends "weight to reports that Kim is staying at an elite area on the country's eastern coast," according to the Washington-based monitoring group.

South Korean government intelligence has also said it believes Kim is staying outside of the capital, Pyongyang.

Kim Jong Un is the third generation of his family to rule North Korea, and he had not previously missed the April 15 event to honor his grandfather since assuming power after his father Kim Jong Il's death in 2011.

Kim's death could cause instability in the insular country of almost 26 million, though many experts say North Korea likely would not face a serious crisis if Kim falls seriously ill or dies, as there are already a few viable successors lined up.

His influential sister and close confidante Kim Yo Jong is tipped to be the next in line. North Korea's state media have not made any public statements about Kim's health. This is not the first time, however, that Kim has vanished from the public eye, and not the first time that such a disappearance has sent rumors swirling about his health.

In 2014, state media did not report any public activities for Kim for about six weeks, before he reappeared with a cane.