North Korea's military says it is preparing for action against the South, days after its leader's sister made threats against Seoul. Pyongyang has said it would convert a demilitarized zone "into a fortress." 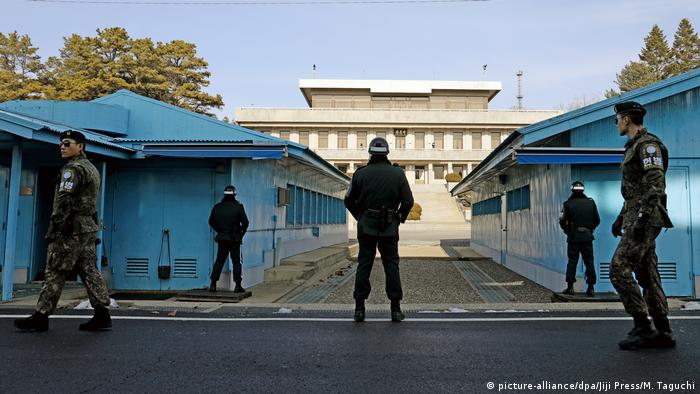 In the latest warning from the North, the General Staff of the Korean People's Army (KPD) said it has been studying an "action plan" to reenter zones that were demilitarized in 2018, threatening to "turn the front line into a fortress."

"Our army will rapidly and thoroughly implement any decisions and orders of the Party and government," the KPA said in a statement carried by the official KCNA news agency.

The scope of the actions the military was considering against the South was not immediately clear. However, the North has threatened to break an inter-Korean military agreement that was signed in 2018 with the aim of reducing tensions at the border.

The pact ushered in the establishment of demilitarized border buffers between the nations. In an act of symbolism, they also dismantled some front-line guard posts.

The country's military also said it would open unspecified areas near the borders in order that North Korea could carry out "large-scale leaflet scattering" in South Korea, in apparent retaliation against defectors and activists who have floated anti-North Korea propaganda over the border.

Propaganda message in a bottle

Responding to the threat, the South Korean defense ministry called for Pyongyang to honor the 2018 agreement.

"We're taking the situation seriously," defense ministry spokeswoman Choi Hyun-soo said in a briefing. "Our military is maintaining readiness posture to be able to respond to any situation."

On Saturday, Kim Yo Jong, the powerful sister of North Korean leader Kim Jong Un, slammed South Korea as "the enemy" and said the North would demolish a "useless" inter-Korean liaison officer.

Experts have said the North could be manufacturing a crisis with South Korea while nuclear negotiations with the US are at a standstill.