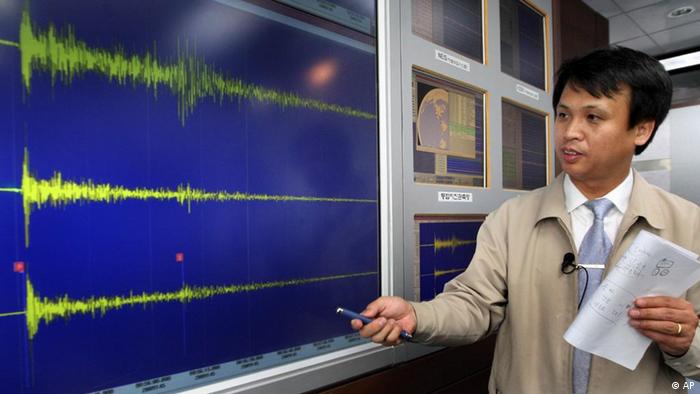 Seismologists in South Korea are concerned about an unusual rash of earthquakes that have shaken the peninsula in recent weeks, with some suggesting that this sudden upsurge in seismic activity might be a precursor to a major — and potentially very destructive — earthquake.

The Korean Peninsula is not traditionally considered to be a part of the so-called Ring of Fire, the seismically active fault lines that run around the rim of the Pacific Ocean. However, seismologists are looking at whether shifting tectonic plates might become a new normal for the Koreas.

Last week, the Korea Meteorological Administration reported a magnitude 2.8 tremor in Wanju County, in the far southwest of South Korea. Although there was no damage reported from the weak quake and nobody was injured, this is the first time since December 2014 that a tremor with a magnitude above 2 has hit the region.

Two days before the Wanju termor, a 3.8-magnitude quake was detected in North Korea. The South's monitoring agency quickly announced it was natural seismic activity to dispel any concerns that it might have been another underground nuclear test conducted by the regime in Pyongyang.

The North conducts its atomic tests at its Punggye-ri proving grounds, in the northeast of the country, with the last detonation on September 3, 2017, of a hydrogen bomb that registered as an earthquake with a magnitude of 6.3.

But of even deeper concern to the experts have been the more than 400 seismic tremors since April 26 in a single area in South Jeolla Province, in the far south-west of the peninsula.

The region has not reported seismic activity since the government first began collating data in 1978.

Experts admit that they do not know for sure what is triggering the activity, but there are some theories as to why it is increasing up and down the peninsula.

"We have been monitoring the South Jeolla events closely because they are very unusual and have been happening in a very short space of time," said Hong Tae-kyung, a professor of seismology at Yonsei University in Seoul.

"It is also unusual because they are happening in a very small area and they are much deeper than usual," he said, adding that quakes on the peninsula usually occur at a depth of around 10 kilometers (6 miles). These latest tremors are happening 20 kilometers beneath the surface.

A blast from the past

"We do not know exactly why this is happening, but there are certainly some theories that need to be verified through further research," said Hong. "My personal speculation is that what we are seeing now is a result of the March 2011 Tohoku earthquake in Japan."

Also known as the Great East Japan Earthquake, the epicenter of the Tohoku quake struck 70 kilometers off the coast of northeast Japan at a depth of approximately 29 kilometers below the seabed.

A megathrust earthquake, it was the most powerful ever recorded in Japan and the fourth largest in the world since 1900.

It unlashed powerful tsunami waves that decimated the northern Japanese coastline with heights of more than 40 meters.

The waves hit the Fukushima nuclear plant, releasing radiation and adding an extra layer to the disaster. Nearly 19,000 people died or are still listed as missing.

"When the Tohoku quake happened, that moved the eastern part of the Korean peninsula about 5 centimeters (2 inches) to the east," said Hong.

There was renewed seismic activity on the Korean peninsula in the months and years after the Tohoku tragedy, Professor Hong said, including a 5.8 tremor in 2016 that was the largest ever recorded in Korea.

But deeper tectonic plate activity was relatively quiet until earlier this year.

Yoshiaki Hisada, a professor at Japan's Kogakuin University focusing on earthquake impact said, historically, the Korean Peninsula has seen little significant seismic activity, and the recent increase in quakes is cause for concern.

"Earthquakes can come and go in areas over a long span of time and might disappear altogether for many years in some parts of the world, only to come back again later," he said.

"The Earth is made up of plates that are always moving, so stresses increase and decrease, but increasing frequency of movements is something that needs to be monitored very carefully. That is a warning sign."

The Korea Meteorological Administration has installed a number of observation facilities in South Jeolla to collect seismic data and, in a worst-case scenario, issue alerts.

Professor Hong says that while there have been no truly devastating earthquakes in a century, historical records show that the peninsula is not completely immune to a major tremor that could cause a significant amount of damage and loss of life.

"Literature that survives from the Joseon Dynasty, which ran for a little over 500 years until 1897, does recount stories of earthquakes and damage to communities on the peninsula," he said.

"From what the researchers can tell, it would appear that they experienced quakes of a magnitude as high as 7, and if that happened in the past, it is, of course, possible that something similar could happen once again."

"I would say that as a result of the Tohoku earthquake, there is an increased possibility that Korea might experience a major tremor. We need to be vigilant."