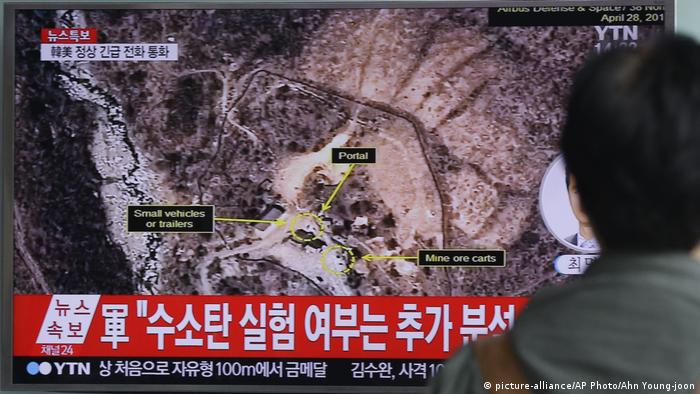 North Korea tested five of its six nuclear bombs at the Mount Mantap test site in the country's northeast near the border with China.

A September 3 test that North Korea claimed was a hydrogen bomb triggered a series of earthquakes in and around the Mount Mantap test site, with an aftershock eight-and-a-half minutes later causing an "onsite collapse toward the nuclear test center," said researchers at the University of Science and Technology of China.

"The occurrence of the collapse should deem the underground infrastructure beneath mountain Mantap not be used for any future nuclear tests," the researchers said in an abstract. "The triggered earthquake swarm indicates that North Korea's past tests have altered the tectonic stress in the region to the extent that previously inactive tectonic faults in the region have reached their state of critical failure."

The peer-reviewed study was accepted for publication in Geophysical Research Letters, a journal of the American Geophysical Union.

The researchers found that any further high-yield nuclear tests would produce an even larger collapse "creating an environmental catastrophe." They said that it was necessary to monitor possible radioactive leaks caused by the mountain collapse.

The Mount Mantap test site is less than 100 kilometers (60 miles) from the border with China, and nuclear tests have caused concern in Beijing and border communities.

International Gallup poll: Diplomacy rather than war with North Korea

Diplomacy not bombs, negotiations not sanctions: Those were the findings of a new opinion poll on the North Korean crisis. It was published as the anti-nuclear ICAN group was awarded the Nobel Peace Prize. (08.10.2017)