North Korea says denuclearization off the table in US talks

North Korea does not need "lengthy talks" with the US and denuclearization is "already gone out of the negotiating table," Pyongyang's UN envoy said. "We'll see," responded US President Donald Trump. 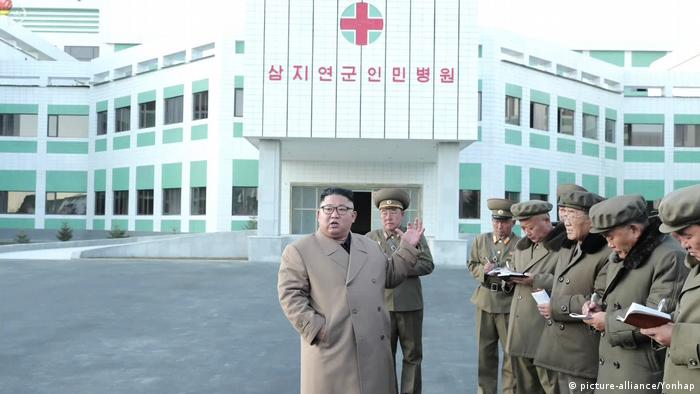 The talks between Pyongyang and Washington are merely a "time-saving trick" for the US administration to advance its "domestic political agenda," the North Korean ambassador to the UN said on Friday, apparently referencing the 2020 election campaign.

"We do not need to have lengthy talks with the US now and denuclearization is already gone out of the negotiating table," Ambassador Kim Song said.

"As these six EU member states are making much trouble to play the role of pet dog of the United States in recent months, one cannot but wonder what do they get in return," he said.

US President Donald Trump quickly commented on Song's statement, saying that North Korean dictator Kim Jong Un would like to "see something happen."

"We'll see about North Korea," Trump told reporters at the White House. "The relationship is very good, but there is some hostility, there's no question about it."

'Dotage of a dotard'

Trump and Kim have had verbal clashes in the past, but also unexpectedly smooth periods of rapprochement. The US leader slammed Kim as "rocket man" in 2017, with Pyongyang firing back and labeling Trump a "dotard."

However, the two leaders also met twice since then in an effort to reduce tensions, despite the second summit in February 2019 breaking down with no results. Less than a month after the failed meeting in Vietnam, Trump canceled a package of sanctions against North Korea because he "likes Chairman Kim," according to an official statement from the White House.

The tensions have risen again in recent months, with Trump once again calling Kim "rocket man" on Tuesday and Pyongyang answering that any repeat of such language would represent "the relapse of the dotage of a dotard."