Hawaii has tested a nuclear attack warning for the first time since the Cold War, after North Korea claimed its missiles could hit anywhere in the US. The UN will hold talks later this month in a bid to lower tensions.

**This article refers to a test of Hawaii's attack warning system in December 2017 — for more information on the false alarm from January 13, 2018, please read this article: Hawaii officials mistakenly warn of inbound ballistic missile  **

Sirens across the US state of Hawaii went off for one minute at 11:45 a.m. (21:45 UTC) on Friday, followed by a one-minute "attack warning signal," the Hawaii Emergency Management Agency (HEMA) said.

"It is critically important for the public to understand what each tone means," Vern Miyagi, the head of HEMA, told the Honolulu Star Advertiser newspaper.

The warning sound means people should immediately seek shelter, the paper said, "because a North Korean missile could arrive in Hawaii just 20 minutes after launch."

Despite Friday's test, many on Hawaii's beaches failed to take notice, according to reports. 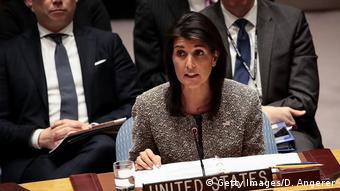 US Defense Secretary Jim Mattis said the missile had flown higher than any previous missile fired by the communist state.

All 15 UN council members have condemned the launch.

On Friday, South Korea's Defense Ministry said the launch is potentially capable of striking targets as far away as 13,000 kilometers (8,100 miles), putting Washington within reach.

Japan has said it will host a ministerial meeting of the UN Security Council on December 15 to look for peaceful ways to prompt North Korea to end its nuclear and ballistic missile tests and denuclearize the Korean peninsula.

Japan's UN Ambassador Koro Bessho said more must be done beyond the "very robust" sanctions the council has imposed targeting the financing and materials for Kim Jong Un's nuclear and missile programs.

UN Secretary-General Antonio Guterres is expected to brief the council, with US Secretary of State Rex Tillerson likely to attend.

Nikki Haley, the US ambassador to the UN, told an emergency council meeting on Wednesday that the missile launch had brought the world closer to a war the US doesn't want, warning that if war comes then Kim's regime "will be utterly destroyed."

"If somebody is very eager to use force to wipe out North Korea, as the United States' UN envoy said, it was a very bloodthirsty tirade," Russian news agencies quoted Lavrov as saying.

Lavrov said he had "the impression over the last two months that there is someone in Washington who wants to provoke new actions" by the North.