Emergency management officials have said an alert warning a missile was on its way to Hawaii was a "false alarm." The error caused a stir on social media and panic among the US state's residents. 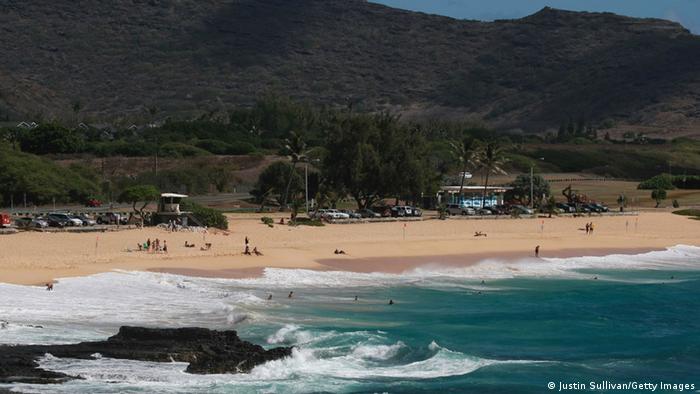 Hawaii residents woke up on Saturday morning to an emergency alert on their mobile phones advising them a ballistic missile was headed for the Pacific archipelago.

More than 30 minutes later, authorities sent out a correction confirming there was no threat.

"Hawaii — this is a false alarm," US lawmaker Tulsi Gabbard, who represents the state, announced on Twitter. "I have confirmed with officials there is no incoming missile to Hawaii."

The alert sent to cellphones said in all capital letters: "Ballistic missile threat inbound to Hawaii. Seek immediate shelter. This is not a drill." 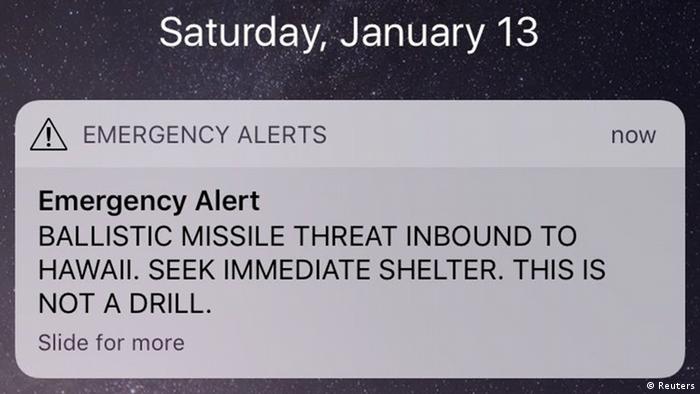 The "Emergency Alert" sent the state's residents into a panic

Gabbard said every mobile phone on Hawaii got the text message. People were thinking, "we've got 15 minutes before me and my family could be dead," she told broadcaster CNN. They were told to take shelter, but there are no nuclear shelters to run to, she added.

The Hawaii Emergency Management Agency's administrator, Vern Miyagi, said he took responsibility for the mistake. He said officials would study the error to make sure it did not happen again.

Hawaii Governor David Ige apologized to the state's residents for the "pain and confusion" caused by the false alarm.

"This should not have happened. We are investigating the sequence of events that occurred," Ige said. "An error was made in Emergency Management which allowed this false alarm to be sent."

In a news conference on Saturday, Ige vowed to launch an evaluation of the alert system and ensure that such a mistake never happened again. He also dismissed claims the alert may have been the result of a hack attack.

About 10 minutes after the initial alert, the Hawaii Emergency Management Agency posted on Twitter and Facebook saying there was no threat, but these messages didn't reach people who weren't on the social media platform.

A mobile alert informing of the false alarm didn't reach cellphones until about 40 minutes later, due to authorization being needed from the Federal Emergency Management Agency's Integral Public Alert and Warning System. 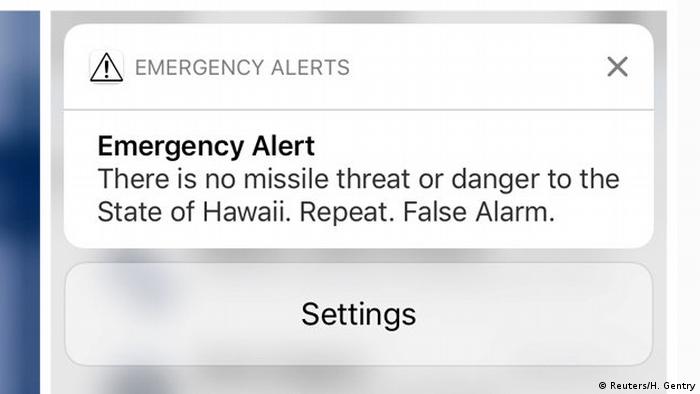 State officials told reporters that the message was mistakenly sent out during a shift change when an employee "pushed the wrong button" at Hawaii's Emergency Management Agency.

US Pacific Command, located on Hawaii, confirmed that it had detected no ballistic missile threat. It said the alert "was sent in error and was a false alarm."

The US Federal Communications Commission later announced it was launching a full investigation.

US President Donald Trump was playing golf in Florida when the incident unfolded. The White House said he had been briefed, and called the warning "purely a state exercise."

"What happened today is totally inexcusable," he wrote.

The false alarm comes at a time of global anxiety over North Korea's nuclear capabilities and the increasingly aggressive rhetoric between the North's leader, Kim Jong Un, and President Trump.

Hawaii announced in November that it would resume monthly testing of nuclear attack warning sirens not used since the end of the Cold War.

After threats from President Trump aimed at North Korea, US Secretary of State Tillerson said he was told to continue working to calming the crisis. He said he'll aim for a peaceful solution "until the first bomb drops." (15.10.2017)