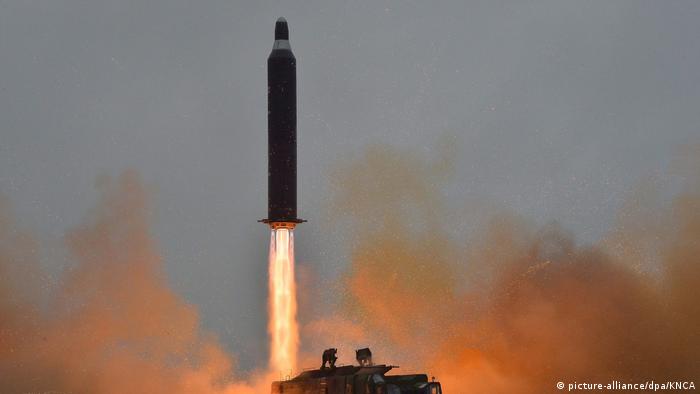 Will North Korea's Kim celebrate his birthday with a 'bang'?

A speech by Kim Jong Un, his upcoming birthday and the inauguration of US President Donald Trump are causing concern right now in Seoul. Could these be the perfect conditions for a new North Korean nuclear test? (06.01.2017)

US President-elect Donald Trump has rejected claims that North Korea is close to test-launching an intercontinental ballistic missile. He criticized China, however, for not pulling its weight in discouraging Pyongyang. (03.01.2017)

Kim's missile threat is a shot across Washington's bow

North Korea's leader has hinted that he is ready to order the launch of a game-changing intercontinental ballistic missile - but will he play it careful during Trump's early days in office? Julian Ryall reports. (02.01.2017)

North Korea is close to developing an intercontinental ballistic missile after several nuclear tests, said the state's leader Kim Jong Un. He also urged the US to stop their "anachronistic" policy towards his country. (01.01.2017)

The amount is enough to make 10 nuclear weapons, and is up from 40 kilograms, eight years previous, the ministry said while presenting its two-yearly white paper.

The report claimed that North Korea produced the extra material by reprocessing used fuel rods from its reactor in Yongbyon.

The North has a "considerable" ability to produce weapons from highly-enriched uranium, the paper said. The ministry was unable to estimate weapons-grade uranium stocks, citing difficulties in penetrating the North's secretive uranium program.

The Institute for Science and International Security in the United States estimated that as of June 2016, North Korea had an arsenal of 13 to 21 atomic weapons, compared to 10 to 16 in 2014.

Pyongyang is thought to be planning a nuclear push in 2017 to develop a weapons system that would be capable of hitting the US mainland. Following Kim's announcement, US President-elect Donald Trump took to Twitter to say such a strike "won't happen."

Analysts are split on how close North Korea is to achieving its nuclear goals, but all agree that it has made large strides since Kim  took over as leader after his father Kim Jong Il died in December 2011.

The North's Yongbyon plant was deactivated in 2007 under an aid-for-disarmament agreement, but renovated after the North's third nuclear test in 2013. The type of plutonium needed for a nuclear bomb is typically extracted from spent nuclear reactor fuel.