Christmas Mass at Notre Dame cathedral is canceled for the first time in centuries, due to damage from a devastating fire earlier this year. The Archdiocese of Paris has offered worshipers an alternative. 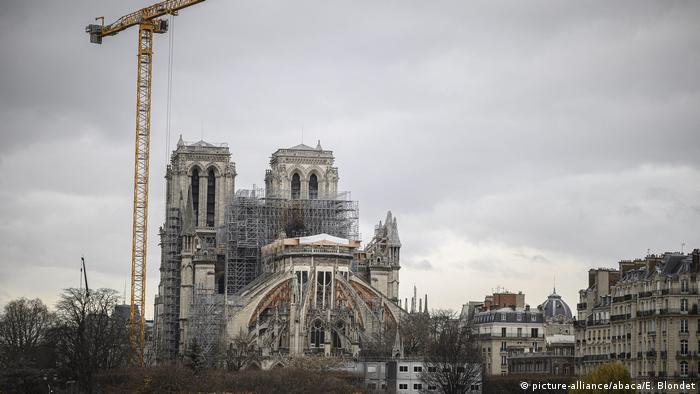 For the first time in over 200 years, there will be no Christmas Mass at the Notre Dame cathedral in Paris, the Archdiocese of Paris said Monday.

The church is still being restored after suffering severe damage in a fire earlier this year.

"There won't be a midnight Mass at Notre Dame. The last time this happened was during the French Revolution. Since 1803, there have always been Christmas Masses at Notre Dame," a diocese spokeswoman said, even during the German occupation of Paris during World War II.

Cleaning up the devastation

On April 15, the world watched in horror as a fire tore through the religious landmark in the French capital, causing the roof and spire to collapse. Investigators believe the blaze was an accident.

French President Emmanuel Macron has promised to rebuild the cathedral on the Ile de la Cite by 2024.

"It's painful because we would have liked to celebrate Christmas at Notre Dame," said the cathedral's senior administrative cleric, Monsignor Patrick Chauvet. "But, at the same time, there is also hope: We're pressing ahead with the rebuilding, for example, this huge crane, which will help remove this damn scaffolding.

"Read more: Opinion: Notre Dame is a symbol of Europe

Metal scaffolding used for maintenance work prior to the blaze melted during the fire and became enmeshed in the cathedral's structure.

Restorers will now try to remove it. They are also still working to stabilize the church to prevent it from collapsing.

The cathedral must also be cleaned: A large amount of lead used in the construction of the roof was released when the structure melted in the fire, polluting the rest of the building.

Plan B for Christmas

Notre Dame normally attracts tens of thousands of tourists and worshipers every day.

The cathedral features in Victor Hugo's novel The Hunchback of Notre Dame. Napoleon Bonaparte crowned himself Emperor there in 1804.