The Mass comes as pledges from billionaires to fund restoration of the cathedral have failed to materialize. Instead, it's mainly been small donations filling the church's coffers. 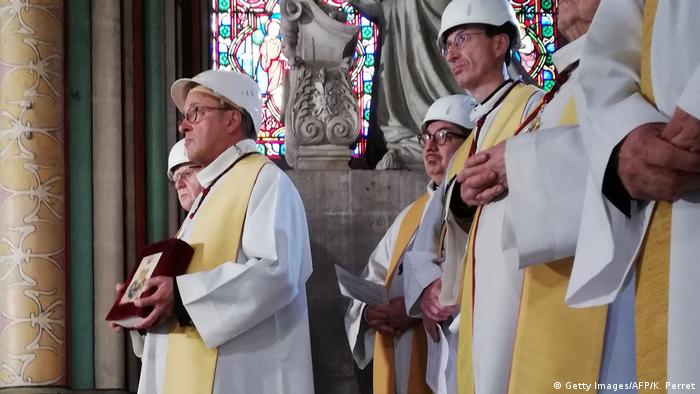 A Mass was celebrated at Notre Dame Cathedral on Saturday evening, the first since a fire destroyed large parts of the iconic Paris landmark nearly two months ago.

Around 30 priests and church employees attended the annual Dedication Mass marking the site's consecration as a place of worship in the Chapel of the Virgin on the east side of the cathedral. They were required to wear safety helmets as a precaution against falling debris.

Archbishop of Paris Michel Aupetit led the service, which was broadcast live on television.

Since the roof and spire collapsed in the blaze on April 15, workers have been trying to clean the inside and outside of the 12th-century edifice as well as restore parts of the church.

Culture Minister Franck Riester said Friday that the cathedral remained in "a fragile state" and the vaulted roof "could still collapse" at any moment.

Restoration and reconstruction of the cathedral could cost almost €850 million ($955 million) and take more than a decade to complete. French President Emmanuel Macron has vowed to complete reconstruction in five years, a time frame experts say is probably unrealistic.

Exactly how the restoration will be paid for is uncertain. Pledges from billionaire French donors have yet to materialize, with only €80 million in mostly small donations having been handed over, Riester told French radio.

Fashion moguls Bernard Arnault and Francois-Henri Pinault promised a total of €300 million after the fire, while energy giant Total pledged €100 million and the Bettencourt Schueller Foundation, linked to the L'Oreal fortune, offered another €200 million.

Riester said major donors were holding back for two reasons.

"First, you might have people who promised to give but who in the end won't," he said. "But mostly, and this is normal, is that the donations will be handed over as the work advances."

The major donors have said they still plan to donate but want to see how reconstruction plans progress and how the state intends to use the funds.

The French government has passed a law regulating the restoration of the Paris cathedral. It called for work to be completed swiftly while preserving the building's French-Gothic appearance as it was before the fire. (28.05.2019)