The French government has passed a law regulating the restoration of the Paris cathedral. It called for work to be completed swiftly while preserving the building's French-Gothic appearance as it was before the fire. The French Senate on Monday enacted a law that will regulate the restoration of the Notre Dame Cathedral, after lawmakers reportedly negotiated for hours over how to finance and organize the reconstruction.

The bill ended up including an addendum specifying that the cathedral is to be renovated preserving the "last-known visual condition" of the monument, including the spire.

After a fire destroyed most of the cathedral's roof and toppled its spire on April 15, the French government announced an international competition to replace the destroyed spire with a "contemporary architectural statement."

According to French media, almost a dozen architects submitted proposals, including a glass spire or a beam of light shooting into the sky. A swimming pool was even pitched by one Swedish architecture firm.

Notre Dame's spire was restored in the 19th century by Eugene Viollet le Duc, after its earlier medieval spire was demolished in the 18th century. 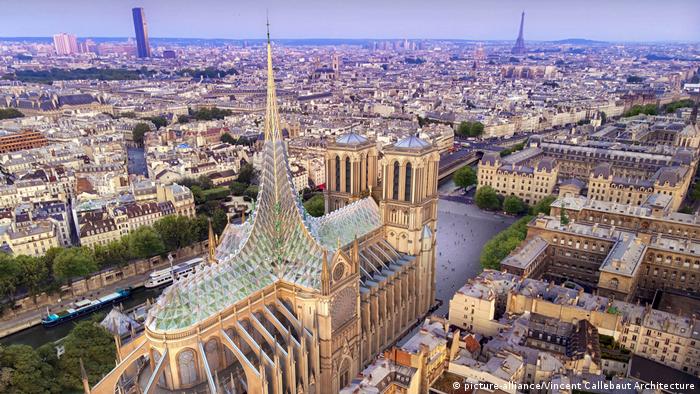 Some architects have called for the Notre Dame to be modernized

A new look for Notre Dame?

According to an opinion poll published in April, most respondents said they want the cathedral to be rebuilt exactly as it was before the blaze. French President Emmanuel Macron had pledged that the Notre Dame would be rebuilt by 2024, in time for the Olympic Games in Paris.

In a statement released after the bill was passed, senators said that the reconstruction site at the cathedral would have to be "exemplary." The law also calls for setting up a public body run by the French Culture Ministry to organize financing and workflow.

The law's draft bill, which was approved earlier in May, drew controversy because of its ambitious time frame that also removed bureaucratic hurdles, which some critics suggest may potentially endanger the historic structure.

The AFP news agency reported that nearly €1 billion ($1.1 billion) has been donated or pledged for Notre Dame's reconstruction, with experts estimating that the total cost could amount to €700 million.

Longest and deepest subsea power cable to be connected between Cyprus, Greece, and Israel 0m ago

US grants temporary protected status to Venezuelans 1h ago