Looters stormed through Lagos while a crowded prison caught on fire in the latest bout of violence shaking Nigeria. Speaking from the scene, DW's correspondent Fanny Facsar said there was "chaos" in the city. 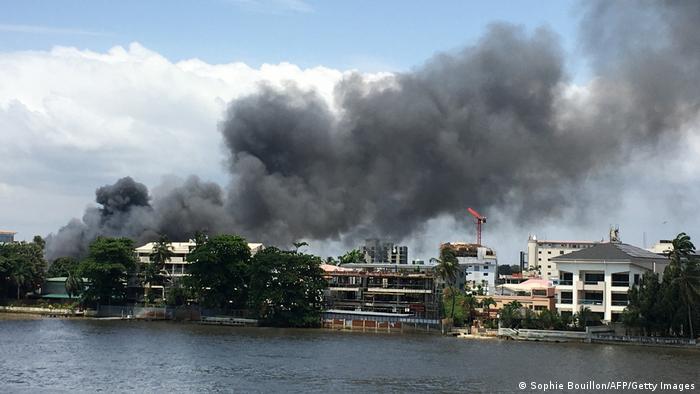 Nigeria's President Buhari called on #EndSARS protesters to stop demonstrating and engage with the government on Thursday as the weeks-long unrest continued to escalate.

Buhari also urged the protesters to "resist the temptation of being used by some subversive elements to cause chaos."

His remarks come after the US condemned "excessive force" that Nigerian military apparently used against unarmed civilians and called for restraint. The African Union also called for an end to violence which followed protests against police brutality.

In his speech on Thursday, Buhari did not mention the shooting. Instead, he urged the international community to learn "all the facts available" before rushing to judgement.

Meanwhile, the country's commercial capital of Lagos saw a fire break out in a crowded prison, and witnesses reported hearing gunfire. Looters also broke into shops in various parts of the city.

The police spokesman marked the "hoodlums" as separate from the thousands of demonstrators who had been protesting police brutality.

Reporting from Lagos, Fanny Facsar said there was "chaos" on the streets.

The #EndSARS protesters claim "these criminal elements, these criminals have been financed by the government to basically hijack the protests," Facsar added.

The city of 20 million is under a round-the-clock curfew imposed after nearly two weeks of protests against police brutality — the West African nation's biggest wave of unrest since the end of military rule in 1999.

Several other states are also under curfew, with officials in the oil-producing Delta state saying they would enact a a 48-hour curfew from 6 p.m. (1700 GMT) on Thursday.

At least 56 people have died across the country since the protests began on October 8, with about 38 killed nationwide on Tuesday alone, according to Amnesty International.

Human Rights Watch also corroborated reports that the Nigerian army had opened fire on protesters on Tuesday in what the NGOs described as "a shooting spree."

The use of lethal force by security forces drew international condemnation, with the UN High Commissioner for Human Rights Michelle Bachelet saying it could have been premeditated.

Human rights group Amnesty International released a damning report in June this year in which it said it had documented 82 cases of police brutality in Nigeria between 2017 and 2020.

"Detainees in SARS custody have been subjected to a variety of methods of torture including hanging, mock execution, beating, punching and kicking, burning with cigarettes, waterboarding, near-asphyxiation with plastic bags, forcing detainees to assume stressful bodily positions and sexual violence," the report said.

Nigeria's #EndSARS protests: What you need to know

After at least a dozen protesters were killed and injured in Lagos earlier this week, Nigeria's demonstrators are trying to regroup. The violence comes after two weeks of peaceful protests against police brutality.

Nigerian law enforcement has begun training the newly established SWAT unit. On the streets, protests against police brutality continue — more so in the south of Nigeria than in the north.

Despite young people comprising Africa's majority, their political participation is riddled with inconsistencies. Many young Kenyans won't vote this August, but it is likely to be very different next year in Nigeria.

A year after gunmen in the Nigerian city of Lagos opened fire on demonstrators calling for an end to police brutality, many fear their future is more uncertain than ever. DW's Flourish Chukwurah reports on how the victims are still seeking justice.