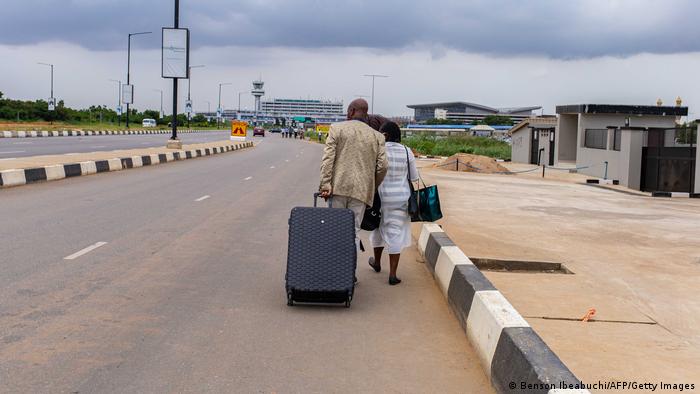 The Nigerian state of Lagos imposed a 24-hour curfew on Tuesday in response to nationwide protests over police brutality. The curfew would apply to all parts of the state, including the metropolis of Lagos, authorities said.

Only essential service providers and first responders will be allowed on the streets across the state.

"The curfew will not end tomorrow. A 24-hour curfew means all round the clock, day and night. It is indefinite," said Lagos state governor's spokesman, Gboyega Akosile. "Nobody moves until we lift the curfew."

Despite the curfew, some protesters did not leave the Lekki Toll Plaza in Lagos, which they had been occupying for two weeks. Amnesty International Nigeria said they had received credible evidence that protesters were fatally shot.

Some social media reports said there were instances of security forces opening fire.

"There have been reports of shooting. The state government has ordered an investigation into the incident," Lagos state Commissioner for Information and Strategy Gbenga Omotoso said in a statement late Tuesday.

Nigerian activists have long accused the police unit known as the Special Anti-Robbery Squad (SARS) of kidnapping, harassment and extortion. However, the unit now faces widespread outrage over a video that allegedly shows SARS officers killing a man.

The video, which surfaced less than two weeks ago, triggered nationwide protests with 18 people losing their lives in the subsequent unrest. Protesters claim they are facing attacks by assailants in civilian clothes.

DW's Fanny Facsar reported that the Lagos State governor had brought in the 24-hour curfew to tackle what he described as "chaos on the street."

Governor Babajide Sanwo-Olu said peaceful protests had "degenerated into a monster that is threatening the well-being of our society."

The state governor then accused "criminals and miscreants" of "hiding under the umbrella of these protests to unleash mayhem on our state." Separately, the authorities in southern Edo state said organized groups pretending to be protesters attacked two Nigerian prisons and freed nearly 2,000 inmates on Tuesday.

Lagos state has a population of more than 21 million people; the city of Lagos is Africa's most populous.

Following the unrest, Nigeria's police chief on Tuesday ordered the nationwide deployment of riot police as the protests spiraled out of control.

In a statement, a police spokesman said that they were being dispatched "to protect the lives and property of all Nigerians and secure critical national infrastructure across the country."

Crowds have taken to the streets of Nigeria in protest against police brutality. The demonstrations come as the government disbanded a controversial security unit accused of misconduct.