Crowds have taken to the streets of Nigeria in protest against police brutality. The demonstrations come as the government disbanded a controversial security unit accused of misconduct. 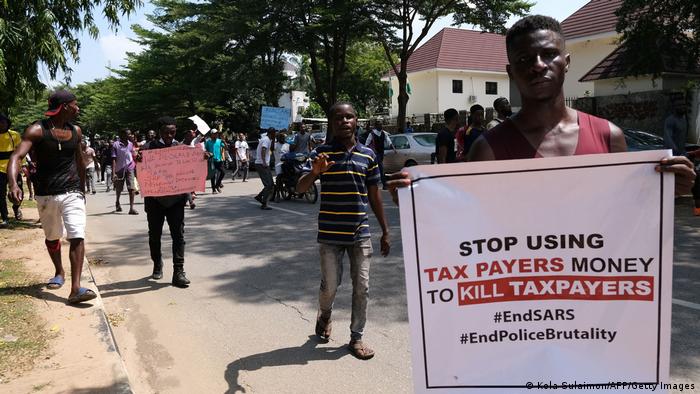 Crowds took to the streets again in Nigeria's largest cities on Monday in protest against police brutality.

Rights group Amnesty International said five people had died since the start of the weekend, bringing the death toll to 15 since demonstrations erupted earlier this month.

In Lagos, thousands brought the city to a standstill amid an outpouring of anger towards the country's notorious Special Anti-Robbery Squad (SARS).

Authorities scrapped the unit a week ago and promised to overhaul the country's police force. A new SWAT unit was set to start training on Monday.

In the capital Abuja, security forces fired tear gas at protesters, according to the AFP news agency.

Around 50 young men in civilian clothes armed with machetes chased away demonstrators from a road close to the presidential compound.

In Benin city in southern Nigeria, a crowd stormed a prison and freed inmates.

Local media, quoted by the Associated Press, said as many as 200 prisoners escaped. It is as yet unclear if there were any casualties from prison break.

The local governor said he was imposing a 24-hour curfew after the incident.

Sunday Dare, the Nigerian youth minister, said the government had met the demonstrators demands, including the creation of an independent body to investigate alleged misconduct.

"It is time to move to the next stage, that next stage is dialogue," he told Reuters news agency in an interview.

Could Nigeria's #EndSARS protests grow into a movement?

Young Nigerians took to the streets to force the end of a notorious police unit last week. The call to #EndSARS was ultimately met and protesters seem determined to stay on the streets to hold power to account.