Authorities in Zamfara state have declared a curfew and shut markets after violence erupted as the girls were reunited with their parents. Security forces opened fire after stones were thrown at government officials. 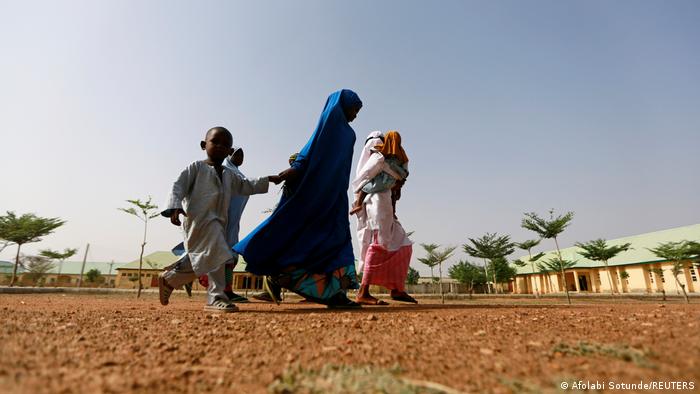 Authorities in Nigeria's Zamfara state have declared a curfew and shut markets after violence overshadowed the return of hundreds of kidnapped schoolgirls to their families, a state government spokesman said on Thursday.

Late on Wednesday, gunshots and chaos broke out during what was expected to be a joyous return of 279 schoolgirls who had been abducted by gunmen from their boarding school last week with their families.

At least three people were shot in the violence. One person died and two were injured in the mayhem, according to local media reports. Security forces opened fire after stones were thrown at government officials, apparently in frustration at the drawn-out operation, said the reports.

Anxious parents who were reunited with the girls after six days of waiting grabbed their daughters and left after the shots rang out. Many were worried about traveling on the area's dangerous roads at night.

Zamfara state spokesman Sulaiman Tunau Anka called it "unfortunate civil disobedience" and said the governor had imposed a dusk-to-dawn curfew in the town of Jangebe in order to prevent further chaos.

Anka said market activities would be suspended until further notice as authorities had uncovered "strong evidence" that these activities had aided and abetted bandits. He did not offer more details.

"The state government is poised to ensure safety of lives and properties of its citizens at all cost," he said.

Earlier this week, President Muhammadu Buhari ordered a military deployment to Zamfara, banned mining and imposed a no-fly zone in the state.

The girls, aged 10 and up, had been abducted from the Government Girls Secondary School last Friday and were released on Tuesday after negotiations.

Last week's abduction in Jangebe marked the third mass school kidnapping in northern Nigeria since December. Nigeria has seen several such abductions in recent years, most notably in 2014, when 276 girls were abducted by Boko Haram from a secondary school in Chibok, Borno state. More than 100 of those girls are still missing.