Gunmen have abducted hundreds of children in an attack on a boarding school. Nigerian President Muhammadu Buhari said his government would not "succumb to blackmail by bandits." 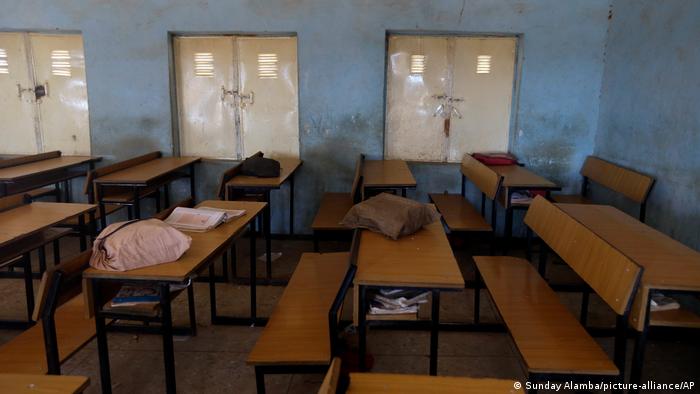 An armed gang abducted over 300 schoolgirls in an attack on a boarding school in northwestern Nigeria, authorities said on Friday.

"There's information that they were moved to a neighboring forest, and we are tracking and exercising caution," police commissioner of Nigeria's Zamfara state, Abutu Yaro, told reporters.

No group immediately claimed responsibility for the raid.

"This administration will not succumb to blackmail by bandits who target innocent school students in the expectations of huge ransom payment," he said in a statement.

Buhari urged state governments to review their policy of giving money and vehicles as payments to criminal groups.

"Such a policy has the potential to backfire with disastrous consequences," Buhari said.

UN Secretary-General Antonio Guterres also condemned the incident, calling for the children's "immediate and unconditional release," according to his spokesman, Stephane Dujarric.

The overnight incident — the second mass kidnapping in a week — took place in the town of Jangebe, Zamfara, at around midnight.

"Information available to me said they came with vehicles and moved the students, they also moved some on foot," he said.

A local resident told the AP news agency that the group also attacked a nearby military camp and checkpoint to keep the soldiers away from school.

Tensions were running high after the attack, with local people venting their emotions on reporters and security forces.

"The villagers stoned the two vehicles we were in, which forced us to hurriedly leave," said Umar Shehu, a reporter with Daily Trust newspaper. He also told the AFP news agency that a video journalist sustained a head injury when a rock hit the windshield.

Parents gathered at the school to wait for news, two teachers said.

A number of armed groups operate in Zamfara state, and are known to kidnap for money or in return for the release of their members from prison.

"We are angered and saddened by yet another brutal attack on schoolchildren in Nigeria," he said. "This is a gross violation of children's rights and a horrific experience for children to go through."

He said the gunmen were likely "kidnapping for ransom," and that some Nigerians in rural areas were turning to these gangs because they felt abandoned by the government.

"It's worsening insecurity, it's poverty, it's bad governance, it's injustice, it's corruption," he said. "When you don't give them a job, when you don't give him his own cattle to rear, what else is he going to do?"

Nigeria's northwest has seen a rise in attacks by heavily armed criminal gangs in recent years. These groups are largely driven by financial motives, but there are concerns they are being infiltrated by jihadi militants waging an insurgency in the region.

Last week, unidentified gunmen killed a student and kidnapped 42 people, including 27 children, in an overnight raid on a boarding school in Niger state, which neighbors Zamfara. The hostages are yet to be released.

In December, more than 300 boys were taken from a school in the state of Katsina. They were eventually freed.

In the most notorious abduction case in recent years, Boko Haram militants kidnapped 276 schoolgirls from the town of Chibok in Borno state in 2014. About 100 of them are still missing.

Canada: Most espionage since Cold War amid pandemic 3h ago