The governor of Zamfara state has said that 279 girls taken from a school are "now safe." Their abduction was the second mass school kidnapping to take place in Nigeria this year.

Hundreds of Nigerian students kidnapped from their boarding school in the northern state of Zamfara have been released, state governor Dr. Bello Matawalle said on Tuesday.

"Alhamdulillah! It gladdens my heart to announce the release of the abducted students of GGSS Jangebe from captivity," Matawalle wrote on Twitter. "This follows the scaling of several hurdles laid against our efforts. I enjoin all well-meaning Nigerians to rejoice with us as our daughters are now safe."

Local outlet Premium Times said that the girls were released at around 4 a.m. on Tuesday morning.

Authorities had initially reported that 317 girls were abducted from the Government Girls Junior Secondary School in Jangebe on Friday morning. But Governor Matawalle told DW that 279 students had been taken hostage, and that all of them had been rescued. 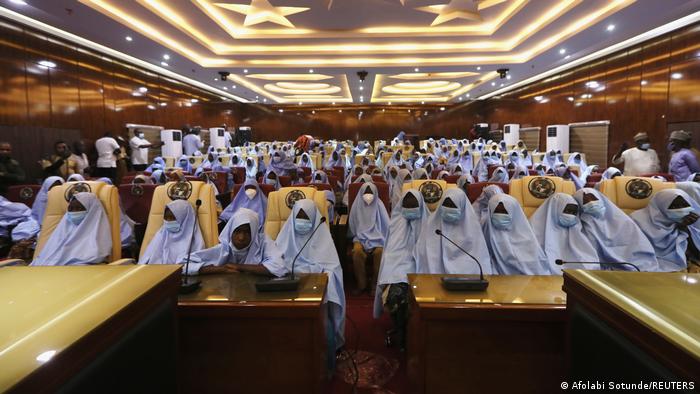 The 279 girls were received at a government property in Zamfara

Faruku Abdullahi, a father of one of the students who was released, told DW he has already been reunited with his daughter and that she is doing well.

"I feel very very happy, I cannot even mention how my happiness is as of today," he said.

"We have seen our children, we thank the government particularly," Abdullahi added.

President Muhammadu Buhari expressed "overwhelming joy'' that the girls had been freed.

"I join the families and people of Zamfara state in welcoming and celebrating the release of these traumatized female students,'' he said in a statement.

"Being held in captivity is an agonizing experience not only for the victims, but also their families and all of us."

Buhari also called for greater vigilance to prevent such attacks in the future, and warned state governments that paying ransom money for hostages could only lead to more kidnappings.

Governor Matawalle told DW that no payments were made to the kidnappers secure the girls' release.

"We rescued these students based on understanding we have with the repentant bandits," he told DW.

"For the past three days they have been going up and down in order to secure the release of these children and today we have gotten the result — the children are here with us."

Matawalle said he would implement new measures to improve security in the region "so that the incident would never be repeated."

On Friday, armed gunmen kidnapped the students, aged between 12 and 17. It was the second school kidnapping to take place in Nigeria this year, coming just a week after bandits raided a school in the north-central state of Niger and abducted over 40 people.

Those hostages  were freed on Saturday.

Several large groups of armed men operate in Zamfara state, and are known to kidnap for ransom and to push for the release of their members from jail.

UN Secretary-General Antonio Guterres strongly condemned the abductions last week, calling for the "immediate and unconditional release" of the students. He also called attacks on schools a grave violation of human rights.

Nigeria has seen several such attacks and kidnappings over the years, most notably in the mass abduction in April 2014 by jihadist group Boko Haram, of 276 girls from a school in Borno state. More than a hundred of those girls are still missing.

Local vigilantes and police have rescued a group of children who were kidnapped by an armed gang. The release followed a shootout in northwestern Nigeria.