All is dark at night. So how can a plant attract pollinators – specifically, bats? Researchers writing in Science magazine report that a Cuban rainforest plant has evolved a clever solution: Acoustically-shaped leaves. 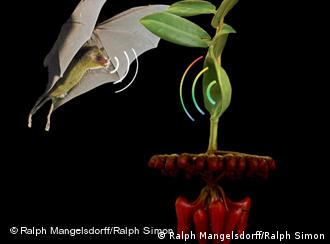 A rainforest plant has evolved to attract bats

Most plants are pollinated through bees, but one plant, Marcgravia evenia, which grows in the Cuban rainforest, has it a little harder: it has to attract on-the-go bats in the dark of night.

Instead of using their eyes, the flying mammals orient themselves with echolocation: they send out ultrasound waves and listen closely to which sounds echo back.

According to a study published Friday in the journal Science, a team of British, German and Canadian researchers have shown that this newly-discovered plant that has evolved to reflect back especially audible ultrasound waves. Marcgravia evenia achieves this through concave, spherically shaped leaves. 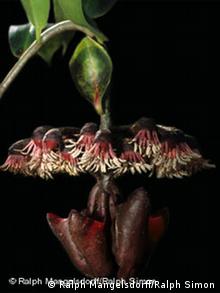 Concave hemispherical shapes are particularly easy for bats to find in the dark, according to Ralph Simon, an Ulm University biologist, and co-author of the paper.

"That's why we weren't particularly surprised when we found this plant in Cuba, which presents with spherically formed, large leaves above its blossoms," Simon told Deutsche Welle.

"By night, we observed bats at these blossoms, which went totally crazy over the large amount of nectar there," he said.

The scientists measured the sound reflection of the dish-like Marcgravia evenia leaves and found that indeed, the echo from there is louder. Moreover, the research team found that the echo remains at the same volume even when the bat changes its position.

Regular, flat leaves, such as those on other plants in the rainforest, only bounce back strongly audible echoes when the wave hits them at a specific angle. If the animal moves one degree left or right, its echo response is faded.

The hemispherical leaves, through their form, maintain "a different sound form from the surrounding vegetation, through which their blossoms become more conspicuous," Simon added. 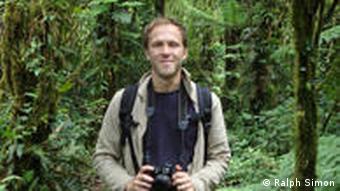 In the laboratory, Ralph Simon and his colleagues were able to reproduce just how this trick works: In an artificial forest, bats found a feeding array in thick foliage twice as fast when a replica of a dish-shaped Marcgravia evenia leaf was brought into play.

Within 12 seconds, the bat arrived at its goal, whereas without the hemispherical guides, it needed 23 seconds.

If the feeding array was fitted with a flat, regular leaf, the search, at 22 seconds, lasted nearly as long as with nothing.

"This echo beacon has benefits for both the plant and the bats," said Marc Holderied, a biology lecturer at the University of Bristol, in the United Kingdom, in a statement. Holderied was also one of the paper's co-authors.

"On one hand, it increases the foraging efficiency of nectar-feeding bats, which is of particular importance as they have to pay hundreds of visits to flowers each night to fulfill their energy needs," he said. "On the other hand, the M. evenia vine occurs in such low abundance that it requires highly mobile pollinators."

Few mammals send as much of a shiver down the spine as bats. But experts insist they are misunderstood and actually play a vital role in our ecosystem. Reason enough for the UN to declare 2011 the Year of the Bat. (06.01.2011)

Bat experts from 32 European countries have met in Prague to discuss the state of Europe's bat population, which is under increasing threat from human activity and a mysterious new fungus. (21.09.2010)

Wildlife pathologists in Berlin are testing European bats for the presence of a fungus that has been linked with the deaths of over a million bats in the US. The research could help the US populations avoid extinction. (19.02.2010)

Find out more about the Bonn conference