Wildlife pathologists in Berlin are testing European bats for the presence of a fungus that has been linked with the deaths of over a million bats in the US. The research could help the US populations avoid extinction. 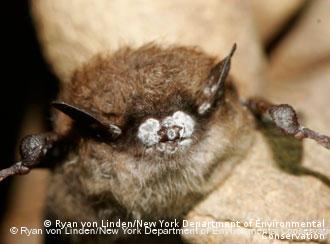 The fungus was first discovered in bats hibernating in New York

Four winters ago, a caver saw bats acting strangely outside a cavern in upstate New York. Biologists arrived to find bats clustered near the entrance, trying to fly during the daytime. But seeing bats crashing into the snow was only the start of the horror.

Inside the cave, hundreds of bats were dead. On closer inspection, biologists found that many of the animals had a powdery white substance on their noses.

Since then, "white-nose syndrome" has killed an unprecedented number of cave- and mine-roosting bats in the United States. The disease has spread to nine other states, killed over one million bats, and in many colonies caused 80 to 100 percent mortality. 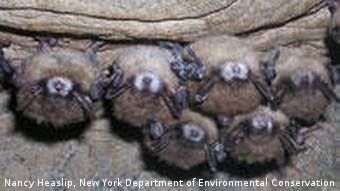 Bats with white fuzz on their muzzles have been seen in several European countries since the 1980s. Bat researchers had no cause for worry about these apparently healthy bats until white-nose syndrome arrived in the United States.

In October 2008, David Blehert, a microbiologist from Wisconsin-based USGS National Wildlife Health Center, discovered that the substance on North American bats was a new strain of fungus in the Geomyces family. Since the fungus destroys healthy tissue, Blehert dubbed it Geomyces destructans.

When the reports of the epidemic surfaced in Europe, some bat conservationists here feared that they might see similar declines in European bats. Others argued that European bats soon groomed the fungus off, and appeared healthy.

In trying to find answers to the puzzling phenomenon, researchers on both sides of the Atlantic have turned to bat disease specialist, Gudrun Wibbelt, at the Leibniz Institute for Zoo and Wildlife Research (IZW) in Berlin. 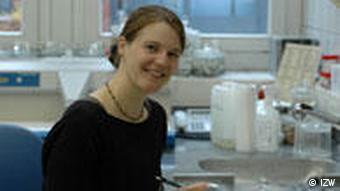 Wibbelt is coordinating a study of samples sent to IZW by four European countries. "It has been a concerted effort," said Wibbelt. She and her team are checking to see whether the fungi found on any of the six European bat species is the North American Geomyces destructans.

Under the microscope, Geomyces destructans has a unique curved shape, but the only way to be certain of the species is through genetic analysis. David Blehert sent Wibbelt his protocol for the genetic work. She and her colleagues then began sequencing the European bat samples.

"The most important thing to remember is that there have been no mass mortalities in Europe," said Wibbelt. "So if it is the same fungus, it's actually exciting news."

European bats may hold the key to recovering US populations. "If the fungus is native to Europe, then how local bats survived may hold lessons for the survivability of bats in the US," said Paul Cryan, research biologist with the USGS Science Center in Colorado.

Helping North American bats to survive is a priority for the scientists working on the crisis. The disease has traveled hundreds of miles per winter. Last year, it arrived in Virginia and West Virginia; this year, Tennessee, Kentucky, and Georgia are on the alert.

"Some hibernating colonies in the northeast have already been completely wiped out," said Thomas Kunz, an ecologist and bat expert at Boston University. "If this continues to spread, we are talking about extinctions."

The US Fish and Wildlife Service has closed federal caves to all but scientists in confirmed white-nose states. Biologists are just beginning this year's survey. Getting to the 500 northeastern caves through deep snow and ice is difficult enough. Many researchers, horrified by the thousands of dead bats they saw in caves last year, are not looking forward to the job.

"We expect more mortality; we just can't say yet how bad it will be," said Tom Kunz. About 900 miles to the south, Gary McCracken, professor of ecology and evolutionary biology at the University of Tennessee, suspects that the fungus has already arrived. "I'd be very surprised if we don't see it in Tennessee this winter." 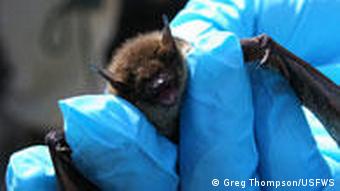 The little brown bat, Myotis lucifugus, was once the most common in the US

Killed by a skin infection

It isn't yet proven that the fungus itself is killing the bats, but most researchers seem to think so. Bats hibernate to save energy during the cold winter months when insects are scarce. They rely on stored fat to live until spring. A healthy bat rouses every 15 to 30 days to urinate, drink, and mate. By the end of winter, 90 percent of their fat reserves are gone.

Bats with white-nose syndrome rouse every three to four days, perhaps because the fungus is causing irritation. Instead of staying in the warm recesses of the cave, they often cluster near the entrance, and even fly out as if looking for food. The constant arousal causes bats to use up fat reserves and starve to death.

If the fungus proves to be Geomyces destructans, then one hypothesis is that European bats have learned to live with it. "There may have been some prehistorical time where there were more individuals of each bat species in Europe, and only the resistant forms survived a similar epidemic," said Kunz.

The first step is confirming the presence of the fungus. "The European connection is very important if it turns out that G. destructans occurs there without causing mortality," said Paul Cryan. "For those of us dealing with white-nose syndrome in North America, that information would be a light on a very dark horizon."

Rates of extinction are said to be so high, that some have equated the crisis to the challenge posed by climate change. But is it really that dramatic? DW spoke to Achim Steiner, head of the UN Environment Program. (18.01.2010)

2009 not a good year for wildlife preservation, WWF says

While some species are seeing a chance of new beginnings, the World Wide Fund for Nature is giving a poor report card on halting biodiversity loss for 2009. (29.12.2009)

Everyday exposure to airborne fungal spores increases the risk of disease, but new information on fungal spores could help improve understanding of the climate system and climate change. (15.07.2009)