The Catholic Church, the Boy Scouts, schools and hospitals are expected to be hit by hundreds of lawsuits under a new law lifting the statute of limitations on child sexual abuse cases. 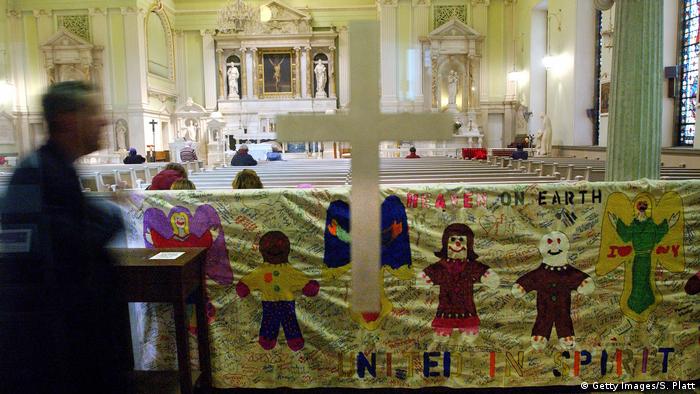 Hundreds, if not thousands, of civil lawsuits are expected to be filed in New York by victims of sexual abuse against institutions including the Roman Catholic Church under a temporary state law that went into effect on Wednesday.

Hundreds of people filed lawsuits on the first day of a one-year window allowing molestation lawsuits that had been blocked by New York's statute of limitations, which were one of the most restrictive in the nation.

Read more: Child sex abuse: How long do the statutes of limitations run in the EU?

The Catholic Church, the Boy Scouts, schools, youth groups and hospitals are among the many institutions expected to be hit by lawsuits that could reach hundreds of millions of dollars and put them under financial strain.

At least one woman who alleges she was sexually abused by Jeffery Epstein and associates filed a lawsuit against the financier's estate. More were expected to follow. Epstein died from an apparent suicide at a New York City prison on Saturday while awaiting trial.

The Roman Catholic Archdiocese of New York said in a statement that it anticipated a stream of lawsuits and invited "people to consider" a compensation program for those sexually abused by clergy.

Since the program was instituted in 2016, the archdiocese has paid more than $66 million (€59 million) in compensation to 335 victims.

"While we carefully review the claims made in these suits, we ask that people pray for peace and healing for all those who have suffered from the sin and crime of the sexual abuse of minors, wherever it occurred," the archdiocese's statement said.

A similar law passed in California in 2002 led the Catholic dioceses there to pay $1.2 billion in legal settlements.

Advocates, mental health experts and victims say it can take years for those abused to open up about sexual crimes committed against them by powerful figures such as priests, teachers or other adults. Shame, embarrassment, fear and a feeling that no one would believe them also play a role in failing to come forward.

cw/aw (AP, Reuters)Each evening at 1830 UTC, DW's editors send out a selection of the day's hard news and quality feature journalism. You can sign up to receive it directly here.

Police have said that this year's crime statistics paint a grim picture of the state of child welfare in Germany. More than 100 children were killed in 2018, and thousands were sexually abused. (06.06.2019)

Pope Francis has promised to stop cover-ups of child sexual abuse in the Catholic Chuch "as was usual in the past." Francis said clergymen who should have spiritually guided children instead became "tormentors." (24.02.2019)