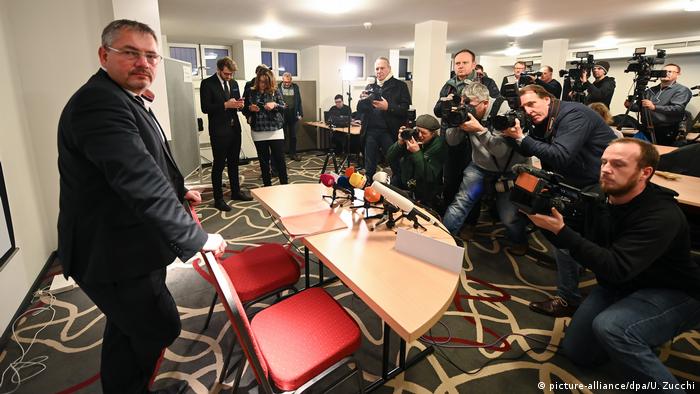 At a press conference on Wednesday, Stephan E.'s defense lawyer announced that his client had presented a new description of the course of events leading to the death of Walter Lübcke in June 2019.

The lawyer, Frank Hannig, said that Stephen E., the main suspect in the case, had testified that another accomplice shot Lübcke by accident.

Walter Lübcke, a member of Chancellor Angela Merkel's Christian Democrats (CDU) who had been the president of the district council for Kassel, was shot at his home in Wolfhagen-Istha, North-Hesse, on June 2. Stephan E. was arrested on suspicion of his murder shortly after and has been in custody for the past five months.

Investigators believe that right-wing extremism had been a motive in the crime. The case prompted widespread concern in Germany over whether enough was being done to combat threats from the far-right.

Stephan E. had initially confessed to killing Lübcke over his pro-migrant views, but withdrew the confession shortly after. Before his death, Lübcke had reportedly received death threats for supporting Merkel's open refugee policy.

According to Hannig, a second suspect, named as Markus H., accompanied Stephan E. to Lübcke's house. Matters then reportedly escalated, and an argument took place on Lübcke's terrace. Markus H. then allegedly fired a shot by mistake.

The lawyer said his client's original, now retracted confession, was intended to shield Markus H. in exchange for protection and financial advantages for his family. Hannig did not elaborate on who might have offered these to his client.

"The indications of possible accomplices as well as connections of the Kassel neo-Nazi scene to the NSU group [the neo-Nazi National Socialist Underground terror cell] must be investigated from front to back," FDP interior expert Benjamin Strasser told French news agency AFP on Wednesday

According to Hannig, Stephan E. will be questioned further on the case. A special session is expected to take place next week. Markus H's lawyer declined to comment, apart from a remark that people could decide for themselves how credible they find someone who has changed their story during the course of an investigation.

Thousands of people have staged a counterprotest against a planned demonstration by a neo-Nazi party in Kassel. The rally comes several weeks after the killing of one of the city's prominent pro-migrant politicians. (20.07.2019)