Even the Danish royal family is hooked on it: Speedminton, a mixture of Badminton and Squash, is the trend sport of the summer. Created in Berlin, the sport is now catching on all over the world. 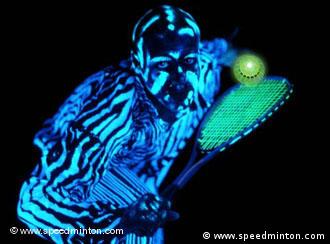 It's summer in Berlin, temperatures are rising and with it the desire to be out in the park and to relax in the fresh air. Barbeques are forbidden, picnics are boring, "speeding," however is not - according to a growing number of young Berliners.

Officially called "Speedminton," the game - a mixture of tennis, squash and badminton - is the summer activity in the city. Played until recently, in typical Berlin manner illegally in the city's parks, the game has now made its breakthrough as an official sport. This summer it won an award at the International Sports Fair in Munich. "Its like a virus," creator Thomas von Klier says. "And its spreading fast."

It all began on a boat. Sailor and passionate badminton player Bill Brandes was fed up of playing such a slow, wind dependant game and wanted something to be able to play on the deck of a ship. More than seven years later, Brandes had developed a shuttlecock which was by far faster and lighter than the usual badminton shuttle. Together with a group of friends, Brandes founded a small firm and in the following years designed and developed special racquets and thought up simple rules for those who prefer a proper match.

For the winter, co-creator von Klier and his colleagues developed an indoor version using half a tennis court - making it playable throughout the year. "Its like a drug," von Klier says. "Once you get hooked, you just can't stop."

From Coburg to Cairo

Von Klier has played Speedminton all over the world. Whether on the marketplace in Quedlinburg or in the deserts of Egypt, the lighting expert always takes his set of racquets and balls with him. While film makers and actors whiled the time away in endlessly long shooting breaks, von Klier would make the most of any welcome intermission and play - in the most unusual of venues. A pastime which soon attracted others on the film set: "Very often during shoots a real Speedminton craze broke out. And everyone wanted to take the game back home."

There are around 6,000 active Speedminton players in Germany. The German badminton community may comprise of more than 150,000, but Speedminton will soon catch up, inventor Brandes forecasts. "Badminton is an old tradition in Germany. But for young people it is just too boring."

Boredom is an unknown word among die-hard "Speeders." Their logo is a lizard: "Lizards are fast, agile and in particular - active at night." So are Speedminton players: When dusk falls over Berlin's tall town houses and first lights in dark apartments go on, Speedminton players get ready for a long, colorful night. Players decorate bare arms and legs with fluorescent paint, black lights are set up and techno beats make loudspeakers vibrate. On these nights "Speedminton" becomes "Blackminton" and players - using luminous shuttlecocks - play until deep into the night.

Sometimes strange things happen during these nightly outings. One evening, von Klier's shuttlecocks kept on changing course. "At first I thought I had drunk too much," he says, with a laugh. "But it was just confused bats."