The father of punk music can now be admired on the big screen. With his latest documentary, "Gimme Danger," cult filmmaker Jim Jarmusch pays homage to Iggy Pop and his legendary band The Stooges.

Jim Jarmusch is a devoted Iggy Pop fan - something that doesn't go unnoticed when you watch his latest film. "Gimme Danger" puts the rock veteran into a very positive light. Jarmusch has personally known the musician for a long time. After all, Jarmusch is a musician himself. He used to play in various bands and even recorded an album.

The filmmaker has also directed music documentaries, including one on Neil Young and his band Crazy Horse (1997). Musicians tend to come up regularly in Jarmusch's films, including John Lurie and Tom Waits. And even Iggy Pop once formed part of the ensemble in a short film by Jarmusch. 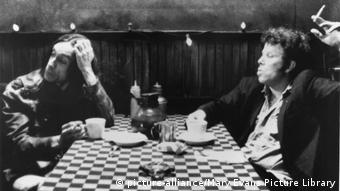 "No other band in the history of rock 'n' roll has ever come close to The Stooges," he raves.

What has impressed Jarmusch most is their combination of heavy drums, psychedelic sounds and a blues-a-billy-grind with laconic texts expressing existential fears and a frontman proudly prancing around like a snarling leopard that's impersonating Nijinsky, Bruce Lee, Harpo Marx and Arthur Rimbaud all at once.

"Gimme Danger" enables viewers to come into direct contact with the incredible musical power of Iggy Pop. The film practically brings them onto the stage while zooming in on The Stooges and their excesses during concerts. 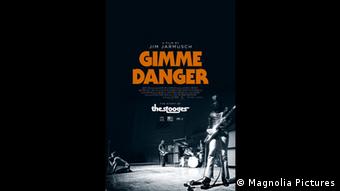 Obviously, Jarmusch's objective wasn't to take a critical look at the music industry. Neither has he scrutinized the years during which Iggy Pop celebrated a solo comeback in Berlin under the aegis of David Bowie.

'The greatest rock 'n' roll band of all time'

Instead, Jarmusch says he aimed to create an essay on Iggy Pop rather than a docomentary. In his view, the film is a declaration of love towards what may turn out to have been the greatest rock 'n' roll band of all time. And he thinks "Gimme Danger" is just as wild, chaotic, emotional, witty, brachial - and classy - as The "Stooges themselves.

An antidote to Trump: Jim Jarmusch and his film 'Paterson'

Jim Jarmusch became an icon of US independent cinema in the 1980s. Now his latest film is exactly the opposite of Trump's style: quiet, sensible, honest and lyrical. (17.11.2016)

After a pioneering career on the rock 'n' roll frontier, Iggy Pop, who saw his great collaborator David Bowie pass away last year, celebrates another milestone. (20.04.2017)

He only lived there for one-and-a-half years, but Bowie never forgot Berlin - and Berlin will never forget David Bowie. DW's Jefferson Chase looks at the death of a musician who'll be forever linked with the city. (11.01.2016)