After a pioneering career on the rock 'n' roll frontier, Iggy Pop, who saw his great collaborator David Bowie pass away last year, celebrates another milestone.

James Newell Osterberg, Jr., born April 21, 1947, might have grown up in a caravan park in rural Michigan, but the witty and intelligent child, the son of a teacher, was voted at school as the student most likely to succeed.

Nonetheless, Osterberg wanted to become a rock musician from a young age. At 15 he was drummer and vocalist in the band The Iguanas. He then played drums in a blues band, The Prime Movers, but lacked a musical direction.

This changed when, at the university he had just quit, Osterberg saw a concert by The Doors that inspired him to become a frontman. Lead singer Jim Morrison was inebriated, walking on and off the stage and provoking audience members while singing in a falsetto. The crowd became angry and threw things at the band. The show lasted barely 20 minutes. Jim Osterberg loved it. He would soon adapt Morrison's confrontational style.

That same year Osterberg founded his first band, the Psychedelic Stooges, and assumed the stage name Iggy Pop. With his bare, sinewy upper body and provocative stage antics, Iggy was set to become the godfather of punk. 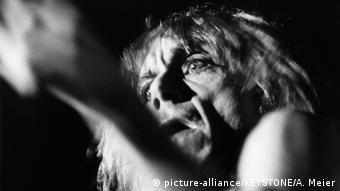 Iggy's band sounded raw, wild, out of control. Changing its name to The Stooges after signing a first record contract with Elektra (the same label as The Doors), the proto-punk band worked with John Cale (The Velvet Underground) on its self-titled debut album and grew a loyal following. But with the record company pressuring Iggy and the Stooges to be more commercial after poor record sales, the group disbanded in 1974.

The Stooges break-up was also partly due to Iggy Pop's worsening heroin addiction. The performer checked himself into a psychiatric ward in 1974. Iggy also continued to perform concerts, to record as a studio musician and develop his image as a wild rock'n'roller and inimitable live performer.

By the mid-1970s, however, Iggy Pop's mounting drug habit included a cocktail of illicit drugs such as cocaine and LSD. He barely ate and harmed himself on stage. On one infamous occasion he slashed his chest with a kitchen knife. Another time he rammed a microphone into his mouth and broke his teeth. Having performed the first ever stage dive, Iggy also rolled in glass on stage. 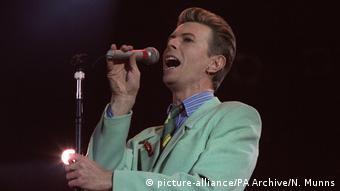 David Bowie, who had mixed the legendary Iggy and the Stooges record, "Raw Power," took Iggy to Berlin in 1976. As they attempted to wean themselves off drugs, the two returned to the studio, Bowie producing Iggy's first two solo records, "The Idiot" and "Lust for Life" - the latter included Iggy's signature song,  "The Passenger." While in Berlin, Iggy also co-wrote the song "China Girl," which later became a worldwide hit for David Bowie .

As his drug problems gradually receded, Iggy continued to embrace his singular punk rock persona while continuing to tour and release albums. In 2003, he reunited with The Stooges, recording a new album and touring extensively with his former band, which entered the Rock'n'Roll Hall of Fame in 2010. He also performed in several films by director Jim Jarmusch, who made a documentary on The Stooges, "Gimme Danger," released in 2016. 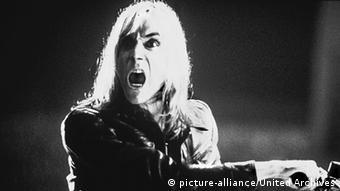 Iggy Pop takes to the stage

Following the death of his good friend and inspired collaborator David Bowie in January 2016, Iggy Pop released the album "Post Pop Depression," which "Pitchfork Magazine" described as Iggy "grieving the recent loss of his long-time champion and career savior." On the track "German Days," he revives his time in Berlin with his dearly departed.

Meanwhile, the punk icon lives on.

Rediscover some of Iggy Pop's greatest hits with our Spotify list.

He only lived there for one-and-a-half years, but Bowie never forgot Berlin - and Berlin will never forget David Bowie. DW's Jefferson Chase looks at the death of a musician who'll be forever linked with the city. (11.01.2016)

It's the house David Bowie shared with Iggy Pop. Bowie also wrote his Berlin trilogy of albums there. Now the address in Schöneberg is more attractive for fans and tourists: It's been decked out with a plaque. (22.08.2016)