New IMF chief calls for Germany to spend on infrastructure

In her inaugural speech in Washington, IMF managing director Kristalina Georgieva pushed for a coordinated effort to fight the sluggish global economy, calling Germany to do its part and start spending more. 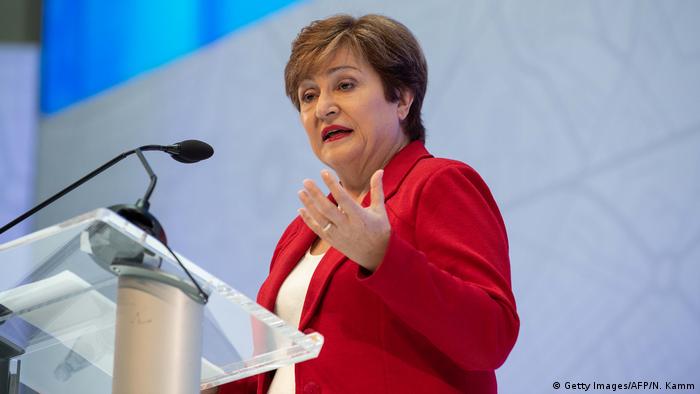 In her first speech as managing director of the International Monetary Fund on Tuesday, Bulgarian Kristalina Georgieva said Germany and other economies with balanced budgets need to spend more domestically.

"Now is the time for countries with room in their budgets to deploy — or get ready to deploy — fiscal firepower," she said in an address ahead of annual meetings for the IMF and the World Bank next week. "In fact, low interest rates may give some policymakers additional money to spend."

Georgieva called out by name Germany, the Netherlands, and South Korea as examples of countries where "an increase in spending — especially in infrastructure and R&D — will help boost demand and growth potential."

The German government has in recent years pursued a balanced budget — known as the "black zero." It has also written into law a so-called "debt brake," requiring the federal as well state governments to limit their expenditures.

The managing director pointed to investments in "reducing corruption" and "utilizing digital tools in tax collection" as having the potential to unlock growth opportunities.

For countries that maintain high levels of debt-to-GDP, she encouraged them to continue exercising fiscal restraint, but not at the expense of education, health, and jobs.

'Everyone loses in a trade war'

The call for spending came packaged in a speech highlighting the sorry state of the greater global economy and a need for what the new IMF chief called a "synchronized" effort to revitalize economic growth.

Her address previewed a number of troubling figures to be released next week in the IMF's World Economic Outlook for 2020. Global economic growth has fallen to its lowest rate in a decade and trade growth is at a near standstill.  Despite low unemployment rates, both the German and US economy are showing signs of trouble ahead. China, after years of rapid economic gains, is also experiencing a slowdown.

Georgieva warned of ever-widening "fractures” in the economy that have been deepened by global trade disputes and geopolitical tensions, like Brexit and the trade war between China and the US.

She cautioned that such protectionist behavior disrupts supply chains and has the potential to create a "'digital Berlin Wall' that forces countries to choose between technology systems." Trade conflict could mean a loss of $700 billion, or 0.8% of global GDP, by 2020.

"Everyone loses in a trade war," she said.

Representatives of the 189 countries that make up the IMF as well as members of the World Bank will gather in Washington next week for their annual meeting to discuss global economic issues.

It is the first annual meeting since 66-year-old Georgieva, who formerly led the World Bank, took over the IMF, replacing former chief Christine Lagarde, who is moving on to head the European Central Bank.