Never To Be Forgotten - Topography of Terror

70 years after the end of World War Two, Berlin’s memorial sites are attracting ever larger crowds. One of the city’s most visited sites is the “Topography of Terror.” DW’s Miriam Lenz took a visit. 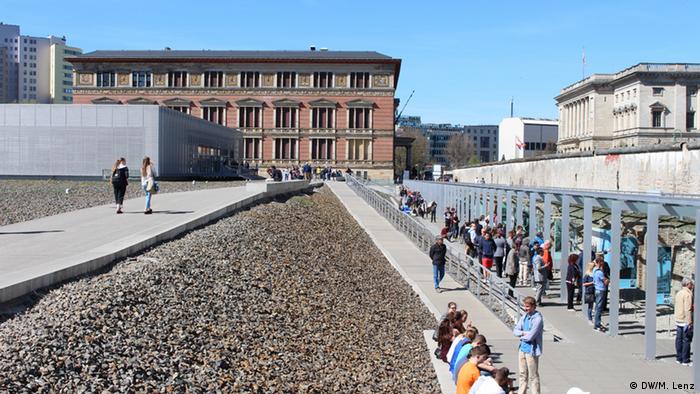 A large crowd has gathered by the information panels, which are suspended from the ceiling by metal ropes. The building’s glass façade lets in a dull light. The Topography of Terror has been open for just half an hour but already it is brimming with people. The first of the day’s tours for school pupils is underway and a group of seniors has begun to make its way through the exhibition. Meanwhile, parents explain to their children in hushed tones who Hitler, the man in the pictures, was. The early-morning bustle is nothing unusual here; in 2014 the Topography of Terror attracted some 1.36 million visitors, more than any other Nazi memorial site.

Unlike the Holocaust Memorial at the Brandenburg Gate which commemorates the Jewish victims of Nazi Germany, the Topography of Terror is primarily a documentation center, designed to inform about the horrors of the Nazi regime. Its location on what was once the political center of Nazi terror adds a poignant dimension to the exhibition. 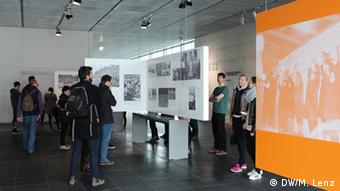 The permanent exhibition focuses on the question: Who planned the Nazi crimes?

The site, which is close to Potsdamer Platz, formerly housed the headquarters of the Gestapo as well as the SS and the Reich Security Office. What remained of the buildings after the war was knocked down and the site left to crumble. It wasn’t until 1987 that a temporary exhibition opened there. More than two decades later, in 2010, the documentation center opened. It features a permanent exhibition alongside a series of temporary displays which deal with the horrors of the Nazi era. Outside, the remains of the Gestapo “house prison” foundations are a further reminder of the horrors that occurred on the site. It was here that some 15,000 Nazi resistors were interrogated and tortured.

Visitors from all over the World

An elderly couple takes a break on a bench near the prison building’s foundations. Maria and Horst come from Bremen; they’ve visited Berlin on several occasions but this is their first time at the Topography of Terror. Their hotel is just around the corner. They stumbled upon the center by chance while out walking. “There’s a whole lot of information,” says Maria, “it’s always shocking to see the Nazis’ atrocities. One asks oneself time and time again how it could have happened. That’s the first thing you need to come to terms with.” Her husband nods in agreement. “I think it’s good that the Nazis’ crimes are documented on this historical site. It’s important. And it’s good that the texts on the panels are presented in English and German and that you hear so many different languages here.” 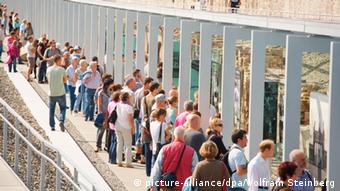 Many of the visitors at the Topography of Terror have indeed come from abroad. Fred and Tony are two elderly men from England. “For a person like me who experienced the Second World War as a child, visiting an exhibition like this is of course especially interesting and moving,” says Tony.

Another visitor with a special connection to this place is Nienke. A young teacher from the Netherlands, she came here during her studies. Now she’s back in Berlin with her parents and boyfriend Jeroen. Showing them the documentation center was a priority for Nienke. Though both she and Jeroen are impressed by the exhibition, they would prefer to see the public treat the site with greater sensitivity. “This isn‘t Disneyland. Some people seem to forget that,” says Nienke, as Jeroen motions with some irritation towards two beaming tourists photographing themselves with a selfie stick near the remains of the Berlin Wall.

Berlin is home to many memorial sites linked to Nazi horrors, including the House of the Wannsee Conference and the German Resistance Memorial Center, both of which have registered an increase in visitor numbers. The Topography of Terror has had a particularly successful run however. In the five years since its opening, it’s welcomed some ten million visitors. 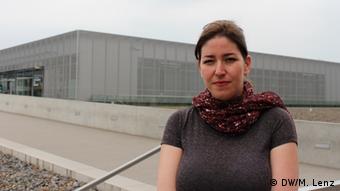 While some avail of the free audio guide provided by the center, other visitors join a tour which is available in eleven languages. One of the tour guides is Adi Kantor from Israel. She came to Berlin more than four years ago as part of her university program. For the past two years, she’s been giving tours in English and Hebrew. “60 minutes isn’t a long time for a tour but I hope that I can provoke visitors to think,” she explains. For her, the documentation center is a representation of what humans are capable of under certain conditions.

“Our aim at the Topography of Terror is to shift the focus onto the perpetrators," she says. For her, it is important to establish a link between the past and the present. “The goal is to educate people about democracy, tolerance and the protection of individual freedoms and to break down prejudices. If my colleagues and I can contribute to that with our tours, then we are doing our job right."