Netherlands releases frozen Gadhafi funds to WHO | Europe | News and current affairs from around the continent | DW | 16.08.2011

The Dutch government has released 100 million euros in frozen assets from Moammar Gadhafi's regime to the World Health Organization. The funds will buy medical supplies for victims of the ongoing conflict in Libya. 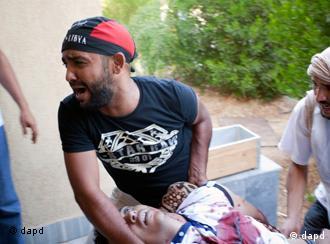 The WHO says medical resouces in Libya are stretched

The Dutch government has agreed to release frozen funds from Moammar Gadhafi's regime to the World Health Organization to buy medicine for the Libyan population as fighting rages on across the country.

The funds worth 100 million euros ($141 million) had been frozen as part of sanctions against Libya's embattled leader. They were released Monday, however, after the WHO appealed to Western governments to free up the frozen money to alleviate shortages in medicine and medical supplies.

The Netherlands was the first country to release the funds after the WHO said the shortages were putting lives at risk.

"Sanctions should squeeze the regime and the population should not be the victim of this. That is precisely what is happening now: frozen money from Gadhafi will be used to save Libyan lives," said Dutch Foreign Minister Uri Rosenthal in a statement.

In total, the Dutch government has 3 billion euros in frozen Libyan funds. The UN sanctions committee granted the release of the initial 100 million, but it was unclear on Tuesday whether the Netherlands would opt to release more.

Last month the WHO warned that many hospitals had been damaged by the six-month conflict. Coupled with the exodus of migrant nurses and the shortage of medicine there had been a "collapse of the primary health care network," the organization warned. 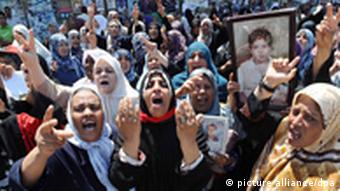 Fighting continued across Libya Tuesday after rebels seeking to end Gadhafi's 41-year-rule denied they were in talks with the leader's regime.

Sources close to the Tunisian security services reported that talks were talking place in Djerba, near the border with Libya, on Monday, as rebel forces drew closer to the capital, Tripoli. But UN spokesman Farhan Haq said there was "no concrete information" on any such talks.

Meanwhile, rebels battled loyalist forces on Monday in the east coastal oil town of Brega as Gadhafi's forces fired a Scud missile - thought to have been aimed at the city - for the first time since the war began.

However, the missile overshot by 50 miles (80 kilometers) and landed "harmlessly in the desert," a US defense official said. No one was injured.

The attack came hours after rebels claimed they had seized "most" of the strategic port, the last barrier before they advance towards Tripoli.

Libyan rebels have advanced into the key port city of Zawiyah just 50 kilometers west of the capital, Tripoli. But forces loyal to Moammar Gadhafi have hit back with shells. (15.08.2011)