Ten new boats full of North African migrants have arrived on the Italian island of Lampedusa. Most have come from Libya, where rebel fighters and Gadhafi's forces continue their battle for control of the country. 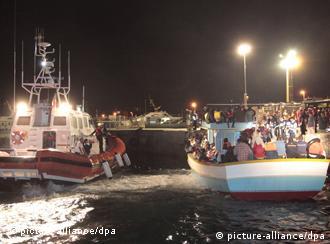 Thousands of people have fled unrest in North Africa for Europe

Waves of refugees have continued to flee Libya for European shores, as Libyan strongman Moammar Gadhafi pledged to up the ante in his battle to stave off advancing rebel fighters.

Some 1,600 North African migrants arrived on the Italian island of Lampedusa this weekend, with the majority of them coming from war-torn Libya. The island's port authority said just 10 boats had carried the hundreds of migrants, which included about 100 women and 40 children.

The island of Lampedusa lies in the Mediterranean Sea between the Tunisian coast and Sicily. Since the beginning of this year some 11,000 North Africans have landed on the island, fleeing uprisings and conflicts in their home countries. The Catholic aid group Sant'Egidio said 1,820 North Africans have drowned his year in the Mediterranean Sea attempting to reach Europe.

The battle for Zawiya

Meanwhile, rebels in Libya were engaged in heavy battles at the weekend to reclaim the strategic town of Zawiya, near the capital of Tripoli. A spokesman for the rebels said they had gained control of the majority of the town and the rebels' red, black and green flag was raised in the town center.

As rebels also reported victories in the western towns of Sorman and Gharyan, Gadhafi made a public television address urging his people to "liberate" Libya from NATO and rebel "rats." 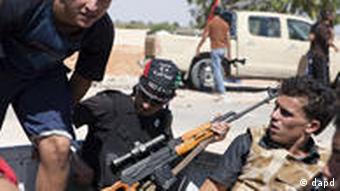 Rebels pushed into the strategic town of Zawiya over the weekend

In the speech, which was aired only in audio by the official broadcaster, Gadhafi said Libya should "get ready for the fight," adding, "The blood of martyrs is fuel for the battlefield."

Rebel fighters said there were still some fighters loyal to Gadhafi in Zawiyah, including snipers, and bursts of artillery and machine gun fire could be heard.

In Tripoli, government spokesman Moussa Ibrahim denied that rebels had taken Zawiya. "A very small group of rebels tried to move into the south of Zawiya," he told reporters, "but were stopped easily because of our armed forces."

If the rebels do control Zawiya, it would put them in their best position since the uprising against Gadhafi began in February. The town is located just 50 kilometers (30 miles) west of Tripoli and stands between the capital and Tunisia on a crucial coastal highway supplying it with food and fuel. Without this link to the outside world, the capital is effectively besieged.

Gadhafi forces still controlled the main border crossing into Tunisia, local residents said late Saturday, but there was no traffic moving on the highway near Zawiya and rebel forces said it was closed.

A NATO official in Brussels described the situation on the ground in Libya as "fluid."

"Pro and anti-Gadhafi forces have been engaging each other. Nothing is certain yet and there is no confirmation about who has control of Zawiya because the situation changes every day," the official said.

When the insurgence began in February, the residents of Zawiya rose up against the Gadhafi regime. Government forces took control of the town again in March, and since then rebels have launched numerous unsuccessful attempts to reclaim it.

The Italian coast guard saved another boat full of north African immigrants bound for Europe after NATO reportedly failed to intervene. The UN refugee agency has now called for rescue efforts to be redoubled. (05.08.2011)