French President Emmanuel Macron has called on Israel's prime minister to make "brave gestures" toward the Palestinian people. The two leaders fundamentally disagreed over the US decision on Jerusalem. 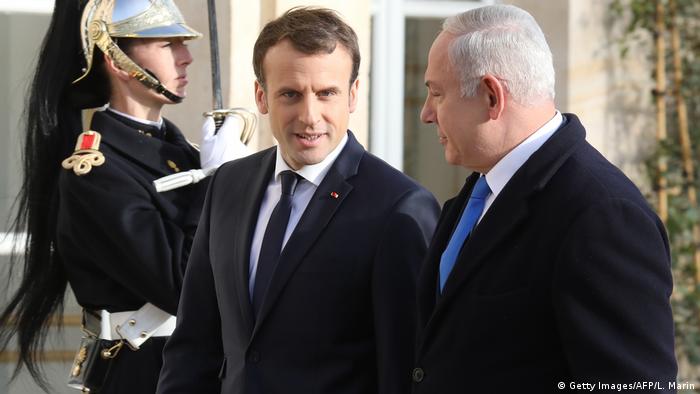 Israeli Prime Minister Benjamin Netanyahu has made his first trip abroad, to Paris, since US President Donald Trump announced last week that the US would recognize Jerusalem as the capital of Israel, drawing international condemnation and sparking violent protests across the Middle East and beyond.

Standing side-by-side with French President Emmanuel Macron during a post-meeting press conference on Sunday, Netanyahu attempted to strike a conciliatory tone, calling the French leader an indispensable leader in the quest for peace in the Middle East.

Even as thousands of Israelis protested against Netanyahu in Tel Aviv, the prime minister insisted he was open to peace talks with Palestinian leader Mahmoud Abbas. And he stole a line from John Lennon, saying he wanted to "give peace a chance.”

Macron agreed that the Israelis and Palestinians should push for peace, which is why he opposes the US declaration on Jerusalem.

"We can only succeed when people talk," Macron said. "I fully agree with Prime Minister Netanyahu, let's give peace a chance."

That is why, he said, "I disapprove of Trump's declaration; as much as it is against international law. There is no contradiction there. It isn't good for the security of Israel."

"Freezing settlement building and confidence measures with regard to the Palestinian Authority are important acts to start with," he said.

During the press conference, Macron urged the prime minister "to show courage in his dealings with the Palestinians to get us out of the current dead end."

Netanyahu, however, insisted that Jerusalem belongs solely to the Jewish people.

"Jerusalem has been the capital of the Jewish people for 3,000 years, and you can read that in a number of places, including the Bible," he said.

Eventually, Netanyahu sought to shift the discussion to Iran, saying that a precondition for peace is recognizing the right of your opponent to exist. Iran has frequently called for Israel's destruction.

Netanyahu lashed out at the Iranian regime, which he said poses an existential threat to Israel, citing their presence in neighboring countries.

"Iran is all over the place," he said. "They're in Iraq, they're in Syria and they're in Lebanon, where the president is valiantly trying to change the situation."

"They're in Gaza, and in Yemen," he continued. "We have to do what we can to stop Iran. Iran wants to entrench itself militarily with land, air and sea forces in Syria. We will not accept that."

"They're also putting precision-guided-missiles in Lebanon, thousands of them, that could be a great danger to Israel," he said. "We won't tolerate that."

The two men agree that US President Donald Trump's decision to recognize Jerusalem as the Israeli capital is a bad idea. They will discuss what, if anything, can be done to counter the US move. (10.12.2017)