Some 10,000 people have staged a "March of Shame" prompted by police probes against Prime Minister Benjamin Netanyahu into allegations of graft. His Likud party has said leftists preferred to "create division." 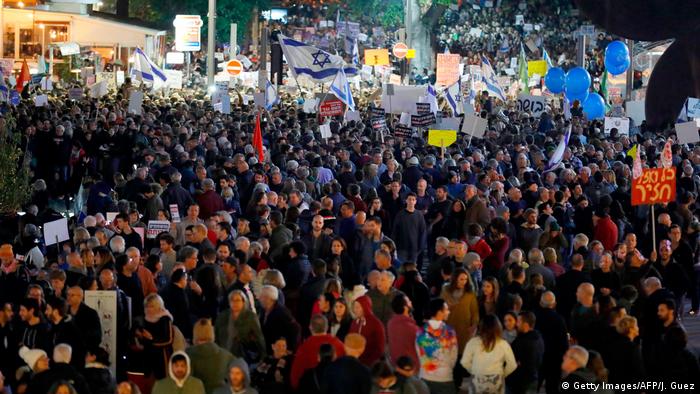 An anti-corruption protest Saturday in Tel Aviv drew half the turnout seen at a similar rally a week ago - before US President Donald Trump's controversial recognition of Jerusalem as Israel's capital.

Protesters wore T-shirts with the slogan "Not right, not left, straight" in Hebrew, rejecting a claim by Netanyahu's right-wing Likud party that his critics were left-wingers who preferred division to uniting "behind Jerusalem."

Marchers held banners reading "We are fed up with corrupt (politicians)" and "sweep the corrupt away," contrary to the four-term leader's repeated denials of any wrongdoing.

Police estimated the turnout at 10,000 demonstrators, down from the 20,000 estimated at a similar anti-corruption rally last weekend.

Netanyahu is suspected of having received luxury gifts from affluent individuals. He has also been questioned over a secret deal he allegedly sought for favorable newspaper coverage.

His close ally, David Bitan, the parliamentary chairman of Israel's ruling coalition,  has also been questioned over separate allegations stemming from his time as deputy mayor of Bishon Lezion, near Tel Aviv.

Netanyahu's popularity was boosted by what he called Trump's "courageous" decision to recognize Jerusalem.

If eventually charged, Netanyahu would come under pressure to resign or call an election to test whether he still has a mandate to govern.