Under pressure over corruption, Israel's Netanyahu calls for change to police bill

Netanyahu has called for the controversial bill to be redrafted so that it doesn't to apply to two corruption probes against him. Critics charge the bill was designed to protect him from corruption investigations. 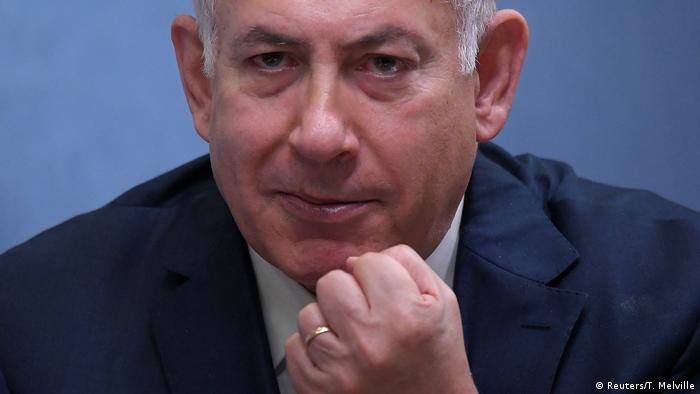 Israeli Prime Minister Benjamin Netanyahu on Sunday called for changes to a controversial draft bill critics say is designed to shield him from ongoing corruption investigations.

The apparent reversal came after tens of thousands of people protested in Tel Aviv on Saturday denouncing corruption and demanding the prime minister step down.

Parliament was expected to vote on a second reading of the so-called recommendations bill on Monday, but after Netanyahu's call that looks less likely. 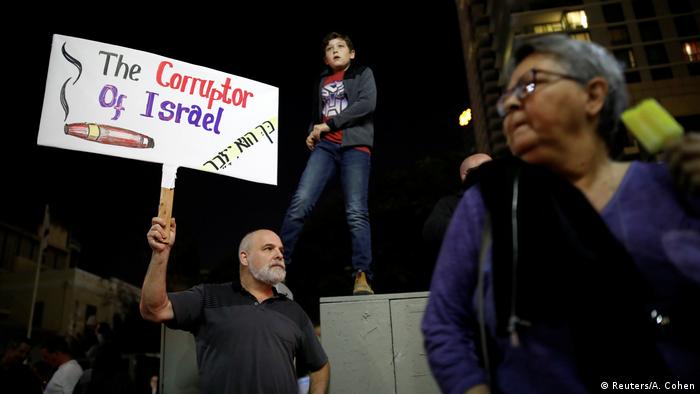 Some 20,000 people took to the streets of Tel Aviv on Saturday to protest corruption and call for Netanyahu to resign.

The prime minister is suspected of corruption and abuse of office in two investigations, which have raised speculation he may be forced to step down if there is an indictment.

Netanyahu wrote on Facebook that he asked lawmakers from his right-wing Likud Party to redraft the bill.

"For the debate on the bill to be topical and not be used for political propaganda, I have asked ... that (it) be worded so that it does not cover the ongoing investigations in my matters," Netanyahu wrote.

While calling for the changes, Netanyahu defended the bill as necessary to protect suspects' rights and prevent smear campaigns through leaks.

Multiple corruption investigations are swirling around Netanyahu and his allies, but only two involve the four-term prime minister directly.

Netanyahu has said the gifts were tokens of friendship, and that no favors were done in exchange.

The second, known as Case 2000, involves allegations that Netanyahu sought to negotiate positive coverage with the owner of Yedioth Ahronoth newspaper in exchange for cutting circulation of the pro-Netanyahu Israel Hayom.

The free circulation Israel Hayom has become Israel's largest newspaper and is backed by US casino magnate and major political donor Sheldon Adelson.

Israeli newspaper Haaretz reported that the chance of an indictment against Netanyahu in Case 2000 increased after the prime minister's former aide, Ari Harow, turned state witness.

Police have seized Harow's phone, which had recordings of conversations between Netanyahu and Arnon Mozes, the publisher of Yedioth Ahronoth.

Netanyahu has said the allegations against him are part of a witch hunt carried out by his opponents.

Several people close to Netanyahu have been implicated in other corruption scandals, including the so-called "Submarine Affair" and another involving the Communications Ministry and telecom giant Bezeq.

Separately on Sunday, police questioned Likud lawmaker David Bitan, a close ally of Netanyahu and coalition whip viewed as one of the main proponents of the controversial recommendations bill.

The investigation relates to suspicion of corruption and links between organized crime and the municipality of Rishon LeZion near Tel Aviv.  Seventeen members of the municipality were arrested, including several with close ties to Bitan.

Israel's health minister, who is also head of an ultra-orthodox Jewish party, has resigned from his post in protest at rail work carried out on the Sabbath. PM Netanyahu's government, however, is not in immediate danger. (26.11.2017)