Fifteen years after neo-Nazis bombed a Turkish neighborhood in Cologne, a new group is spreading hateful propaganda in the area. The home-delivered pamphlets warn of imminent attacks. 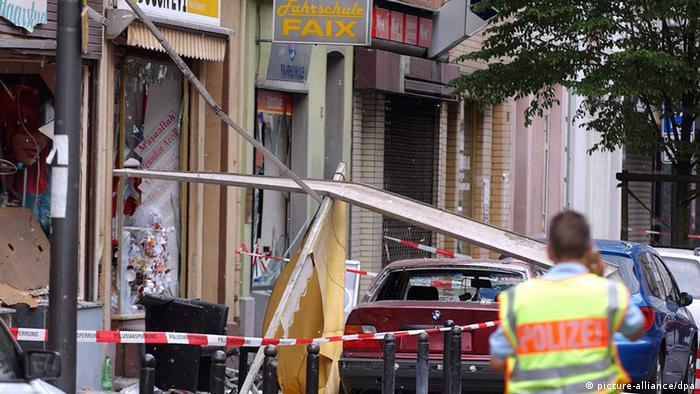 An alt-right group has distributed neo-Nazi pamphlets in the city of Cologne ahead of the 15th anniversary of an anti-Turkish nail bomb attack, police said Friday.

Flyers in unstamped envelopes were left in letterboxes over several days in the suburb of Mülheim, the site of the attack.

On June 9, 2004, members of the National Socialist Underground (NSU), a neo-Nazi terror cell, left a bicycle-mounted nail bomb on Keupstrasse, the center of Turkish and Muslim business in the immigrant neighborhood. The resulting explosion injured 22 people, four of them seriously, destroyed a barbershop and damaged nearby businesses and cars.

Members of the NSU, uncovered in 2011, were found to be responsible for multiple racist murders, two bombings and a series of bank robberies. A long-running court case against the group was plagued by scandals and accusations of state failures.

The pamphlets distributed this week bore large swastikas (a banned symbol in Germany), contained inflammatory messages and warned of imminent acts of violence against Muslims. It told Muslims to leave Germany and called them "legitimate targets."

The pamphlets claimed to be published by a group called Atomwaffen Division Germany. Atomwaffen Division is a relatively new Florida-based, militant neo-Nazi group that plans the violent overthrow of the US government and advocates fascist Nazi beliefs. The Anti-Defamation League classifies it as part of the alt-right movement.

A German division of the group sprung up in mid-2018 with flyers distributed in Berlin and a provocative social media video.

Witnesses have reported seeing a younger brunette woman distributing the envelopes in one of the targeted streets. According to media reports, similar leaflets were distributed in Frankfurt a few days earlier.

A commemoration event is planned for Sunday on the site of the attack, where there have been calls for a permanent memorial. Police are investigating the leaflets, but have said they do not foresee a risk to the event.

More than 100 threatening emails have been sent to politicians, journalists, public figures and institutions across Germany in recent weeks. Investigators see a link between the emails, signed using neo-Nazi terminology. (14.03.2019)