Investigators have uncovered a display of helmets dating back to the Wehrmacht at a barracks in the town of Donaueschingen. The discovery adds another dark twist to the Bundeswehr's probe into far-right sympathizers. 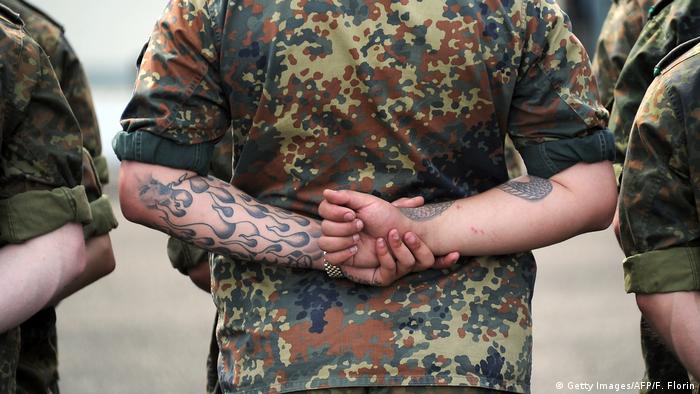 German media reported Saturday that investigators probing far-right sympathizers within the Bundeswehr had discovered a room in the Donaueschingen barracks decorated with memorabilia from the Wehrmacht, the Nazi regime's military forces.

The DPA news agency said that a report about the Nazi memorabilia in the German weekly "Spiegel" had been confirmed by a military spokesman. While denouncing the possession of such memorabilia, the spokesman added that the items were not considered "of criminal relevance."

The probe comes just a week after a German army officer was taken into custody on suspicion of posing as a Syrian asylum seeker with a possible plan to carry out xenophobic attacks on migrants. Investigators said they had also found Nazi-era memorabilia in the garrison of the 28-year-old lieutenant, identified only as Franco A. under Germany's privacy laws.

The barracks in the French town of Illkirch where Franco A. was stationed were at the center of an extremist scandal in 2012, after the German daily "Bild" reported that German soldiers had laid out a four-meter long swastika on the grounds to celebrate their soccer team's victory. Three soldiers were dismissed following the incident. Franco A. was not stationed there at the time.

On a visit to the Illkirch barracks on Wednesday, German Defense Minister Ursula von der Leyen stressed that Germany's modern army would not tolerate any veneration for the traditions and customs of Nazi Wehrmacht.

That sentiment was echoed by German Justice Minister Heiko Maas when he tweeted that "whoever glorifies the Wehrmacht has no place at all in the Bundeswehr."

The International Auschwitz Committee on Saturday responded to the "Spiegel" report by demanding a debate on the leading culture within the Bundeswehr. "For survivors of the Holocaust, the very thought that within a German army Nazi symbols could again be glorified and Wehrmacht traditions resurrected is ghastly and beyond all bearing," said Christoph Heubner, the executive vice-president of the organization.

The German army said last month that it was investigating 275 suspected cases of right-wing extremism within its ranks. Most of the cases were related to propaganda crimes and racist commentary on the internet. In one instance, a soldier wrote abusive messages to a refugee after asking her whether she was Christian or Muslim.

The scandals have piled pressure on von der Leyen, a close ally of Chancellor Angela Merkel , less than five months before the German election. The defense minister drew criticism from an army association after she called out the armed forces for supposed "weak leadership." She later apologized for her criticism of the military but also warned there could be further relevations.

Retired General Harald Kujat told the German weekly newspaper "Welt am Sonntag" that von der Leyen was having a damaging affect on the German military. "The minister's criticism of the military's behavior, leadership and spirit was unacceptable and damaging to the Bundeswehr, while her apology came across as wishy-washy," he said. "The collateral damage of her remarks will have a bearing on the reputation of our forces and the trust placed in our soldiers."

Once Germany's top military officer and chairman of the NATO Military Committee, Gen. Kujat said that von der Leyen had always come across as outsider among Bundeswehr officials and suggested that she was using the German military as a means for advancing her own ambitions.