NATO defense ministers are to consider the implications of Russia's military activities in Syria. Secretary General Jens Stoltenberg said the organization was ready to deploy forces if needed. 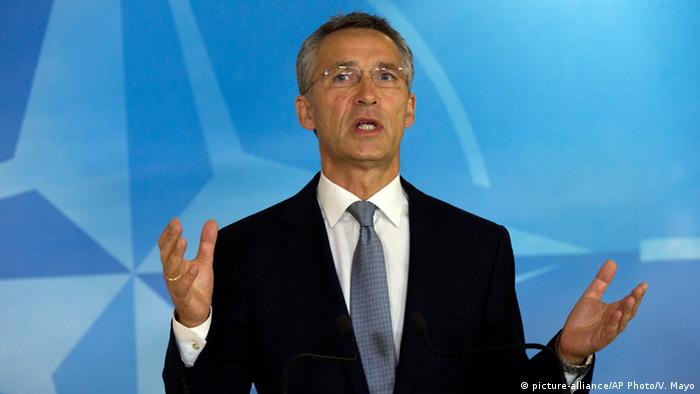 Russia's military campaign in Syria in support of President Bashar al-Assad has brought a strong response from the North Atlantic Treaty Organization: "NATO is able and ready to defend all allies, including Turkey, against any threat," NATO's Jens Stoltenberg said on Thursday.

NATO is holding a meeting in Brussels on Thursday. Russia's military operation in Syria is high on the agenda with ministers ready to consider the implications for NATO's own security of what Stoltenberg called the "troubling escalation of Russian military activities" in Syria.

"In Syria, we have seen a troubling escalation of Russian military activities," Stoltenberg said. "We will assess the latest developments and their implications for the security of the alliance. This is particularly relevant in view of the recent violations of NATO's airspace by Russian aircraft."

NATO was formed in 1949 as a system of collective defense. Member states agree to mutual defense in response to an attack by any external party. Turkey has been a member of NATO since 1952. Germany joined in 1955.

The intergovernmental military alliance of 28 nations has stationed anti-missile Patriot batteries from Germany in Turkey, but they are due to be removed later this year. Defense Minister Ursula von der Leyen said on arrival in Brussels that the air defenses would still be withdrawn.

"The question is what will banish which dangers, and in this context it's the right decision," von der Leyen said.

On his way to the Brussels meeting, UK Defense Minister Michael Fallon said Russia was "making a very serious situation in Syria much more dangerous."

Fallon said: "We'll be calling on Russia specifically to stop propping up the Assad regime, to use their influence constructively to stop Assad bombing his own civilians."

Following Russia's intervention in support of pro-Moscow Ukraine rebels, and its annexation of Crimea in March last year, NATO began the creation of a rapid response force.

The force should be operational from next year. Stoltenberg said this "spearhead" of about 13,000 troops could be deployed both to the east and to the south.

"We are facing many challenges from many different directions. Conflict, instability and insecurity," Stoltenberg remarked. "We are implementing the biggest reinforcement of our collective defence since the end of the Cold War."

The NATO meeting is expected to approve two new units for Hungary and Slovakia to make the response force "bigger, faster and more capable," according to Stoltenberg.

"We will assess what we have to do to adapt NATO to current and future challenges," the NATO chief said.

Syrian President Bashar al-Assad, backed by Russia's warplanes, is reported to have launched a major ground offensive against rebels. Moscow has also fired cruise missiles from the Caspian Sea at "Islamic State" targets. (07.10.2015)